The Cleric, The Cardinal, and the Qur’an 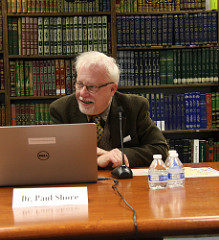 The International Institute of Islamic Thought (IIIT) invited Dr. Paul Shore, Adjunct Professor of Religious Studies at the University of Regina, Canada, to deliver a lecture titled, “The Cleric, The Cardinal, and the Qur’an: A Little-known Chapter in the History of Christian Engagement with Islam” on Thursday,  April 6, 2016.

Dr. Paul Shore has held teaching and research posts at Saint Louis University, Harvard Divinity School, Oxford University, the University of Wroclaw, the University of Edinburgh, Trinity College Dublin, and Charles University Prague. In 2010 he was the Stanley Knowles Distinguished Visiting Professor at Brandon University in Brandon, Manitoba. He is currently Adjunct Professor of Religious Studies at the University of Regina, Saskatchewan, Canada. His publications include The Eagle and the Cross: Jesuits in Late Baroque Prague and Narratives of Adversity: Jesuits on the Eastern Peripheries of the Habsburg Realms (1640-1773).

Dr. Shore began his lecture by thanking IIIT for inviting him and supporting his research through a short-term research grant. Dr. Shore’s research was on the topic of Ignazio Lomellini, a Jesuit priest from Genoa, Italy, who produced what seems to be the first translation of the Qur’an into a European language. The IIIT grant enabled Dr. Shore to travel to Rome and collect biographical data about Lomellini, and make digital copies of the manuscript for further analysis. He also consulted the city archives of Genoa to investigate connections between Lomellini and Muslims in the Mediterranean region.

As a self-described “newcomer to Islamic Studies,” Dr. Shore’s primary research deals with history about the Jesuits. During his research of Jesuit history, Dr. Shore began to come across references to Islam through various languages or stories of conversion. His curiosity was sparked about the connection between Islam and Jesuits especially given the geo-political circumstances between Christians and Muslims in history.

Dr. Shore dove into the historical background of the time period he discussed and set the context for the remainder of the lecture. He spoke of Robert of Ketton, an Arabic translator who translated the Qur’an from Arabic to Latin in 1143. At that time, the Church supported the work of translating the Qur’an as a tool to convert Muslims to Christianity.

Dr. Shore, then, began discussing Lomellini and his family background and the peculiarities of his connection with the Jesuit priesthood. Lomellini came from a prominent family in Genoa that had wealth and political power. Yet, Dr. Shore found neither any records of Lomellini’s works as a Jesuit nor his obituary. This is “peculiar given that the Jesuits are compulsive writers that keep articulate records and are very proud of people who join their priesthood that come from noble backgrounds, he said.

A manuscript of Lomellini’s translation of the Qur’an was displayed by Dr. Shore to show the audience that Lomellini was directly contemplating over each verse of the Qur’an. In the manuscript it was visible that a verse would be written in Arabic and directly beneath it was a translation written by Lomellini, which was followed by a commentary about the verse from Lomellini’s perspective as a Jesuit.

Dr. Shore highlighted the markings by Lomellini and pointed out that they indicated the struggle that Lomellini had in translating the Arabic words. He was not sure who wrote the Arabic in the manuscript. The translations were written in Baroque Latin and the visible notes in the margins referenced people or texts that Lomellini has used either for translation or commentary. Dr. Shore noted that the manuscript shows classic Jesuit logic in its point-by-point debate with the text, and evidence of Lomellini’s Jesuit trained polemical skills.

An interesting point that Dr. Shore highlighted was the way Lomellini chose to translate some of the Arabic text. For example, he translated Allah as Deus showing that there was an understanding that Allah meant God and Muslims believed in God as Christians did. He also translated Isa (Jesus) as Jesus Christ, which implied that Lomellini was inserting Christian language into his translation of the Qur’an — evidence that it was intended to convert Muslims to Christianity, as Islam was considered a threat.

Dr. Shore concluded his lecture by briefly discussing the implication that this manuscript has for modern day Christian-Muslim engagement. He explained that this manuscript has taught him that engaging with the Quranic text is a difficult task especially if one doesn’t know Arabic, and that humans need to acknowledge their own beliefs and perspectives when they explore any text.

The lecture ended with a lively Question and Answer session, enabling the audience to engage with the guest speaker. Dr. Shore intends on continuing his research, including finding more manuscripts that display the engagement between early Christianity and Islam. He is also learning Arabic which will aid his research in the field of Islamic Studies.