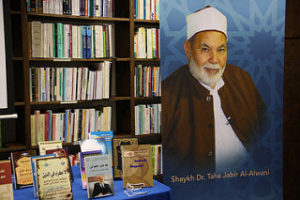 IIIT honored one of its late founders, Shaykh Dr. Taha Jabir Al-Alwani (d. 2016), with an October 23-24 international conference on the renewal of Islamic thought, a topic that he engaged with and pursued throughout his entire adult life. Held at the IIIT headquarters in Herndon, VA, this event celebrated his original and sometimes intellectually provocative contributions to Islamic jurisprudence, in which he had earned a PhD from al-Azhar (1973), most notably his establishment of a new discipline: a jurisprudence for minorities (fiqh al-aqalliyyat).

His daughter and long-time pupil Dr. Zainab Alwani spoke on a usually ignored area: how well Shaykh Taha fulfilled his responsibility as a father who would discuss matters of religion with them instead of demandingunquestionable obedience. She also highlighted his attachment to the Qur’an which was reflected in the methodology he developed for understanding the higher Qur’anic objectives. To illustrate this, Dr. Zainab Alwani recounted how Shaykh Taha discussed the themes and objectives of Surah al-Tariq in the Qur’an, even though he was confined to hospital bed.

The first keynote speaker, Prof. Azizah al-Hibri (University of Richmond law professor and KARAMAH founder), described Dr. Taha as an Islamic visionary who understood both the true soul of Islam and the depth of the ummah’s crisis.  Through his deep knowledge of Islamic fiqh (jurisprudence), and the Arabic language and culture, he was able to shed valuable diagnostic light on the root of ills implicated in today’s crisis in the Muslim World.

Dr. al-Hibri also discussed Dr. Taha’ Islamic worldview based fundamentally on the principle of Tawḥīd(unicity of God) from which emanate two major principles, those of Tazkiyah (self-purification) and ‘Umrān(building civilizations) that are the foundations of a virtuous community enlightened by the values of the Qur’an.  This worldview is explained further in Dr. Taha’s discussion of “al-jam’ bayn al-Qirā’atayn,” a reference to the importance of reading (or more accurately, comprehending) both the world, as well as the Qur’an. According to Dr. Taha, combining and reconciling these two readings is critical to bringing about Tazkiyah and ‘Umrān on earth.

Dr. al-Hibri noted the importance and range of Dr. Taha’s multifaceted works, such as his books Maqāṣid al-Sharī’ah (The Objectives of Shari’ah) and Fiqh al-Aqalliyyāt (The Jurisprudence of Minorities).  In the first, he revived the tradition of judging acts and determining rules in light of their objectives.  At the same time, he pointed out the necessary ḍawābiṭ (criteria) that must govern any maqāṣidī analysis to avoid sinking into error through subjective evaluations.  In the second, Dr. Taha focused on challenges facing Muslims in the (Western) diaspora, and developed a suitable jurisprudence for addressing them.

Finally, Dr. al-Hibri noted the important feature of Dr. Taha’s contributions, namely that he put his theories into action.  As an example, Dr. al-Hibri referred to the famous Supreme Court controversy that arose when KARAMAH invited a group of Muslim leaders to attend a talk by Justice Scalia at the Supreme Court building.  During that event, some Muslims noticed the frieze (or bas relief) in the Supreme Court Room, which contained representations of major lawgivers throughout history, including that of the Prophet Muhammad.  The controversy erupted when a group of Muslim leaders asked the Supreme Court to remove the image of the Prophet. Tensions escalated, and Dr. al-Hibri recounted how she contacted Dr. Taha, among others, asking him for a fatwa on the matter.  Dr. Taha was quick to provide a well-thought out and reasoned fatwa that resolved the crisis. In this incident, he had put into action the principles he advocated in his works, especially Fiqh al-Aqalliyyāt.  At the end of her speech, Dr. al-Hibri summed up her view of Dr. Taha by stating that he “was a class act, as a person and as a jurist.”

In the first paper session, “Foundational and Theoretical Studies,” Scott Lucas (University of Arizona) challenged Shaykh Taha’s contention that the deep crisis in Islamic thought began after al-Tabari (d. 922) and the subsequent triumph of taqlid. This reality allegedly cleared the way for fatalism, which prepared the ground for tyranny, injustice, and despotism. Lucas held that this view “threatens to undermine the ambitious efforts of modernist Islamic thought.” Ahmad Atif Ahmad (University of California – Santa Barbara) noted how Shaykh Taha’s reconsideration of the Hanafi school’s “Theory of the Abodes” to explain the jurisdiction of Islamic legal and moral norms is relevant in our own time. Ahmed Abu Salem (Zayed University, UAE) discussed how Shaykh Taha rejected two extremist views: that the Sunna is irrelevant and that the Qur’an cannot stand alone as a legal source without it. In fact, he asserted that whereas the Sunna is a source of legislation, the Qur’an is the only constitutive source of the Sharia. Salem then focused on the issue of abrogation, arguing that different legal rules on the same issue should be understood as signs of the Qur’an’s universality and eternity because they were revealed in different situation and are therefore applicable in different conditions.

In the second paper session, “Epistemologival Integration,” Md. Mahmudul Hasan (International Islamic University – Malaysia) related Shaykh Taha’s “Sixth Discourse,” namely, “Dealing with the Western Intellectual Heritage,” to the teaching of English literature. Hasan pointed out that receiving such ideas uncritically could lead to “mental enslavement and cultural dislocation.” Rather, Muslims must understand the environment in which these ideas and philosophies arose and what Islam has to say about them. Naglaa Saad M. Hassan (Fayoum University) explored how Islamic teachings were relevant to relatively new discourse of eco-criticism. She explained the three major approaches – anthropocentric, ecocentric, and theocentric – and concluded that verses can be found to support each one of them. In other words, Islam seeks to regulate the relationship between humanity and the universe not in terms of authority and subordination, but in terms of guardianship of Earth and harmony. She referred to this as being a part of what Shaykh Taha called the Islamization of Knowledge – the relating of Islamic discourse to other fields of knowledge. Riham Ahmed Khafagy (Zayed University, UAE) spoke on how awqaf were related to Shaykh Taha’s vision of the Qur’an’s objectives: tawhid, tazkiya, ‘umran, and da‘wa. However, she remarked that the attempt to implement the envisaged epistemological integration between revealed knowledge and contemporary humanities and social sciences has remained largely unaccomplished. In fact, this particular field of research is still isolated from current scholarship and modern practices, both of which actually question the potential of this envisaged integration. She noted, rather surprisingly, that these endowments were traditionally based upon a certain set of motivations, value systems, knowledge, networks, stare-society relations, and ultimate goals that are largely irrelevant to current realities. Moreover, they might not function so well in the context of contemporary Islamic rituals. Liyakat Takim (McMaster University) discussed the new diasporic jurisprudence that has emerged within Shi’i juridical circles. He talked about how the “principle of a lacunae” in Shi’i law can empower jurists to transcend the Sharia’s traditional parameters by allowing jurists to legislate laws for issues that are not explicitly prohibited by textual sources. He also analyzed how earlier Shi’i jurists often appealed to local customary practices while formulating laws to deal with current realities that are absent in the revelatory sources based on the principle of “behavior that is accepted by all ‘reasonable’ people.”

The second keynote speech was delivered by Mohammad Fadel (University of Toronto), who focused on Shaykh Taha’s attempts to transcend differences and encouragement of critical thought. Placing him fully within Muslim modernism, he expounded upon the shaykh’s fatwa on the Supreme Court frieze and how he had formulated it by placing the case within its context – an example of “moral courage vs. obstinacy, fanaticism, and heard-heartedness.” He then discussed Shaykh Taha’s lifelong mission of working toward a renewal of the Islamic community through a recommitment to the Qur’an and the Sunna as the sole arbiters of Islamic teachings. Fadel also asserted that Shaykh Taha always sought to place the Qur’an in the domain of the historical, as opposed to the miraculous, on the grounds that Muslims must have a rational base for their belief if they want to live a fully consistent Muslim life.

Paper session three, “Critial Theory and Comparative Thought,” was addressed by four speakers. Joseph Jon Kaminski (International University of Sarajevo) related the thoughts of Shaykh Taha and Yusuf al-Qaradawi on graven images to show that Islam contains varying degrees of what is and is not acceptable in this regard, based upon form, content, and purpose. He also noted how Arabic culture was “one of the word,” whereas Western culture is “one of imagery” and how some Muslims’ desire to destroy non-Muslim historical structures, places of worship, art, and other items, most infamously the Taliban’s 2008 destruction of the Bamiyan Buddhas, is a very recent development.  After all, Pharaonic Egypt’s enormous amount of structures, art, and sculpture have “survived” centuries of Islamic rule, as have Hindu temples, Buddhist sacred sites, Zoroastrian sculptures, and Christian churches, monasteries, and artwork. Harald Viersen (University of Marburg, Germany) discussed why, from a philosophical perspective, renewal is necessary and what goals it should have. He first dealt with the concept of disenchantment, usually defined as modern science’s undermining of the premoderrn, mystical view of the world that was full of meaning and of God’s signs. He focused primarily of the Moroccan philosopher Taha Abd al-Rahman’s (b. 1944) attempt to remedy this state, which he sees as the cause for the lack of ethics and a source of disunity in both the West and the Islamic world. He opined that this is partly the result of  Descartes (d. 1650) mind-body dualism, which Abd al-Rahman portrays as one between theory and practice (the West has prioritized the former) – an approach that undermines its own ethical grounding. Abd al-Rahman contends that these were connected in traditional thought and that perhaps this dualism could be overcome by drawing from both the sources of Islamic law and Sufi learning. The last three speakers, Maszlee Malik (the International Islamic University – Malaysia), Hasliza Mohamad Ali (Universiti Selangor), and Fatin Nur Majdina Nordin (Universiti Malaya) informed the attendees of Shaykh Taha’s activities in Malaysia. Malik talked about his relationship with Anwar Ibrahim, and Ali and Nordin’s joint paper discussed his thought and intellectual contributions to the Angkatan Belia Islam Malasia (ABIM) youth movement. Malik stated that despite Shaykh Taha’s being relatively unknown in Malaysia, Anwar often cited and promoted his name, ideas and thoughts; the shaykh returned the favor in some of his writings and even supported Anwar when the latter was sentenced to prison, which Shaykh Taha condemned as an “act of injustice” that violated the Sharia. His paper also contended that Anwar’s Islamic agenda and projects during his pre-political engagement with ABIM, while he was in government, and after he became the leader of the opposition were at least partly inspired by Shaykh Taha’s thought. Ali and Nordin reflected upon Shaykh Taha’s close relationship with the (ABIM), an organization founded in 1971 to emphasize an intellectual approach to da‘wa and other activities. They analyzed his major thoughts on the method of da‘wa and its influence upon Islamic movements, as well as their impact upon education, maqasid al-Shari‘ah, and siyaq.

This very productive conference, which also featured intense Q&A interactions, ended with a concluding session moderated by Sinanović. It was decided that the papers will be compiled into an edited volume, which will published after a thorough revision of the papers presented at the conference.