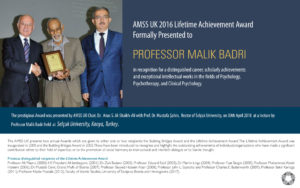 The AMSS UK 2016 Lifetime Achievement Award was formally presented to Professor Malik Badri in recognition for a distinguished career, scholarly achievements and exceptional intellectual works in the fields of Psychology, Psychotherapy, and Clinical Psychology.

The AMSS UK presents two annual Awards which are given to either one or two recipients: the Building Bridges Award and the Lifetime Achievement Award. The Lifetime Achievement Award was inaugurated in 2000 and the Building Bridges Award in 2002. These have been introduced to recognise and highlight the outstanding achievements of individuals/organizations who have made a significant contribution either to their field of expertise, or to the promotion of social harmony, to inter-cultural and interfaith dialogue or to Islamic thought.