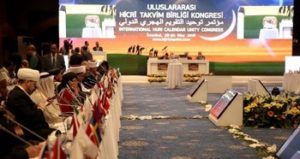 The International Hijri Calendar Union Congress wrapped up on Monday May 30th in Istanbul, hopefully marking the end of a long-standing conflict dividing the world’s Muslims. Scholars from across the globe convening for an event hosted by Turkey’s state-run Presidency of Religious Affairs (DİB) agreed to adopt a single Islamic lunar calendar.

The landmark move is particularly important regarding the observance of religious holidays and especially concerns the fasting month of Ramadan which begins next week, as Muslims will hopefully celebrate the sacred festivals on the same day. Speaking to Daily Sabah on the sidelines, DİB President Mehmet Görmez said the meeting has put an end to “a 60-year-old debate.”The event, started on Saturday, follows years of research by a Science Board composed of scholars and scientists from Turkey, Qatar, Jordan, the United States, European and several Muslim countries. Scholars from Saudi Arabia, Malaysia, United Arab Emirates, Morocco and nearly 50 countries attended the landmark congress which hosted a similar event in 1979, only to see an agreement to reach a unified calendar fell apart in the following years.

Görmez said preparation for the congress started three years ago, with the formation of a commission of scholars in astronomy and fiqh (Islamic jurisprudence) to discuss different ideas on the issue in the Islamic world on an international level. “The commission paved the way for this congress to be a meeting where a solid decision is made, rather than it to remain an event where the issue is merely discussed. We had two proposals in the end, a dual calendar system or a single calendar,” he said, referring to a separate calendar for the western hemisphere or specifically, for Muslims in North and South America. “A dual calendar would not end the problems and we focused on a single calendar which Muslims in every part of the world can observe, so that Ramadan can start on the same day. We put it up for a vote and the majority of scholars agreed on it,” he said. Along with senior scholars from Turkey, the congress hosted Professor Ali Mohuddin al-Qurra Daghi from Qatar, an expert on Islamic jurisprudence, Mohammed Shawkat Awda, a prominent astronomer from the United Arab Emirates, and other renowned scholars. The congress’ decision will now be referred to the Organization of Islamic Cooperation (OIC), the group of 57 Muslim-majority countries, for official adoption in the Muslim world.

Görmez said a few countries might have difficulty adopting the new calendar, but the OIC may be influential in worldwide adoption of the calendar. “This is an ongoing process, but God willing, we hope to put an end to this debate,” he said. Görmez said that Muslims are now a globally ubiquitous community, with a presence in almost all countries, necessitating a unified calendar. “It has been a real challenge, especially in countries where Muslims are a minority. It led to a divide even among the congregation of small mosques, with one group of Muslims observing the religious days on one date, while others observed it on another date. There have been even differences on observation amid the members of same families. This will put an end to it,” he said. For Muslim minorities, especially those in the West, a single calendar means securing a right for observing a religious holiday. “Minorities fought for decades to earn their right to observe their own religious holidays, and they finally gained it. But a new problem arose as the states they lived in asked them to designate an exact date for religious holidays. The single calendar will end Muslims’ challenge on this issue as well,” Görmez stated.

When to observe religious holidays and prayer times has been an issue of debate among Muslim scholars for years. This is especially the case for the observation of Kurban Bayram, known as Eid al-Adha in Arabic or the Festival of Sacrifice, and the culmination of the annual hajj pilgrimage. Differences stem from various scholarly interpretations of Islamic law regarding the sighting of the new moon on which the date is based. Specific acts of worship such as fasting may be considered invalid if observed at different times.

Görmez said there has been a misconception or disregard for scientific facts in the Islamic world. “In this day and age, when people can travel to the moon and observe the movements of sun and moon second by second, in this age of major scientific developments, it was wrong to disregard these developments and insist on observing the new moon with the naked eye by climbing up mountains. God and the prophet tell us to acquire knowledge and use it.” He said that although the problem was not solved in its entirety at the moment, the agreement was at least a first step and as the DİB, they were pleased to see scholars from around the world agree with them on “a right decision” for calendar unity.