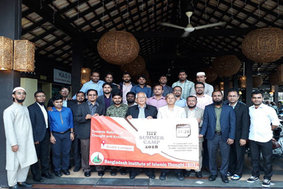 Bangladesh Institute of Islamic Thought (BIIT) -in collaboration with the International Institute of Islamic Thought (IIIT), East and Southeast Asia- organized its 2018 Summer Student Camp (SSC) on January 21- 25, 2018. This residential program was designed for graduate students and exceptional senior undergraduates. It was a meeting place between young Muslim scholars and prominent Islamic thinkers.

This IIIT Summer Student Camp played an important role in combining and integrating modern and Islamic knowledge with best academic practices and approaches through discussion, seminars, presentations, group activities, and visits to research institutes and other sight-seeing trips around Kuala Lumpur.

The session held on the Sunday, January 21st began with the recitation from the holy Qur’an by Hafez Idris Ali. Dr. M. Abdul Aziz on behalf of IIIT Bangladesh and Mr. Shahran Kasim on behalf of IIIT East Asia presented two opening remarks. In their speeches, they explained the objectives and goals of the summer camp. Dr. Aziz mentioned that “This summer camp has been organized with the broad objective of the reform of thought and knowledge, while the specific objectives are to develop a balanced understanding between Western and Islamic theories among young scholars …” Mr. M. Azizul Huq, President of BIIT inaugurated the camp stating that “educated society throughout the Muslim world is divided into two groups. One group is imbued with general knowledge while the other group largely focuses on religious education. This gives rise to misconception about Islam. For the greater benefits, we need people who can integrate revelation and reason in their research.”

Ten lectures on selected topics were given during the camp. Topics included “Issues and Challenges of the 21st Century: Perspective of the Ummah”, “Approaches to the Quran and Sunnah”, “History of the Muslims with a special reference to the Emergence of Bangladesh”, “Issues of Islamic Economics and its relevance to Islamic Banks and Financial Institutions”, “Islamization of Knowledge (IOK): The Case of Islamic Economics”, “Islamic Perspective on Academic Writing”, “Islamic Educational Thoughts from Past to the Present”, “Issues in Education from the Global Perspective”, and “Islamic Epistemology and Integration of Knowledge”, “Priorities and Scopes of Islamic Research: the Case of Bangladesh.”

The students were divided into five groups and each group was given a book to study critically and present a summary at the end of the reading. The book titles were: The Ethics of Disagreement by Taha Jabir Al Alwani; Qur’anic Worldview: A Springboard for Cultural Reform by AbdulHamid AbuSulayman; Muslim Civilization: The Causes of Decline and the Need for Reform by M. Umer Chapra; Usul al Fiqh: Principles of Islamic Jurisprudence by Shah Abdul Hannan. Al Tawhid: Its Implications for Thought and Life by Ismail R. al-Faruqiwas added for all participants.

On January 25th, the event concluded with a ceremony Prof. Emeritus Dato’ Wira Dr. Haji Jamil bin Haji Osman presented his concluding speech on “Youth leadership for the revival of Ummah”. He shared the partial experience of youths in the inculcation of Islamic values in society and advised the youths to work on the revival of Ummah through integration by research and dissemination of knowledge. After his speech, the students received their certificates and awards; some participants even shared their experiences during the camp and the lessons they learnt that will positively impact their future careers. The session ended with the vote of thanks by Mr. Shahran Kasim for the International Institute of Islamic Thought (IIIT), East Asia, and Dr. M. Abdul Aziz on behalf of Bangladesh Institute of Islamic Thought (BIIT).