IIIT Panel on ISIS at the American Academy of Religion (AAR) 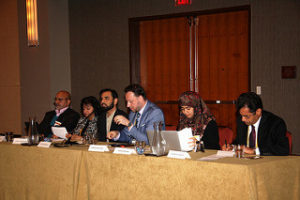 The International Institute of Islamic Thought (IIIT) organized a panel, entitled “ISIS and the Challenge of Interpreting Islam: Text, Context, and Islam-in-Modernity” at the American Academy of Religion (AAR) Annual Meetings on November 21, 2016 in San Antonio, Texas.

The panel was presided by Dr. Ermin Sinanovic, IIIT’s Director of Research and Academic Programs, and featured Dr. Ovamir Anjum, the Imam Khattab Endowed Chair of Islamic Studies at the Department of Philosophy and Religious Studies at University of Toledo, Dr. Ebrahim Moosa, a Professor of Islamic Studies in the Kroc Institute for International Peace Studies and in Notre Dame’s Department of History, Dr. Asma Afsaruddin, a Professor at the Department of Near Eastern Languages and Cultures at Indiana University, Dr. Mona Hassan, an assistant Professor in the departments of Religious Studies & History and the program of International Comparative Studies at Duke University, and Dr. Asaad Al-Saleh, assistant Professor of Arabic Literature, Comparative Literature and Cultural Studies at Indiana University.

The panelists discussed the topic by answering three main questions: How should we best understand ISIS? What role does the Islamic tradition play in enabling, justifying or delegitimizing ISIS? And, is ISIS Islamic?

Each scholar explained ISIS from a different perspective within history, and Islamic and cultural studies.  Dr. Anjum explained that ISIS is categorized as ghulat, rebels or khawarij and they must be fought, according to Islamic tradition. He noted that ISIS is not a uniquely murderous threat, there are a lot of those in the world; however, ISIS is horrifying for psychological reasons. He argued that ISIS is not Islamic and ISIS rejects the existent Islamic scholarship by excommunicating them because Islamic juristic tradition forbids killing non-combatants.

Dr. Moosa discussed the elements that provided the background for ISIS to exists. He argued that, political uprisings, and imperialistic undertakings of the Unites States destabilized the Middle East, that is one component. Another element, he added, is the marginalized people, particularly Sunnis in Iraq, especially after Americans left.

Dr. Afsaruddin described ISIS as a group that desires to reclaim tradition as they see it. ISIS is also a response to modernity which they feel disenfranchised from. She pointed out the Islamic literature in which targeting non-combatants is not allowed, including women, children, religious people, pacifists and elder men. She argued that going against this rule is committing terrorism in modern times and creates mass fear. She thinks that ISIS followers are manipulators of the traditional symbols as well as modernity. She also added that committing murder is not Islamic.

Dr. Hassan answered the questions posed by Dr. Sinanovic in the context of her forthcoming book, Longing for the Lost Caliphate: A Transregional History, Princeton University Press, which will be available in January 2017. She reminded the historic specificity of the issue and defined ISIS as “a product of shattered and traumatized Iraq”. Dr. Hassan, answering what role Islamic tradition plays in delegitimizing ISIS, referred to a statistic that ISIS represents 0.0019 percent of global Muslim population, in other words, about two thousandths of one percent. Dr. Hassan also reminded that there is a long history of both Muslim and non-Muslim groups who draw on symbols to bolster and legitimize their political projects.

Dr. Al-Saleh argued that ISIS selectively takes the ideas from the tradition that fit their ideology, not as a whole, if instead they were taking the ideas entirely, there would be no ISIS. He emphasized that ISIS uses symbolic traditional terms to legitimize their political aims without proper understanding of the tradition. He also added that “reclaiming Islam in collecting bits and pieces from here and there, and showing it as a projection of Islam is problematic.”

The panel attracted the interests of many scholars and graduate students at the AAR conference. At the end of each round, several questions were raised by the audience, many of which focused on how to contextualize ISIS within the tradition.