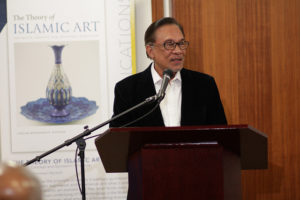 On Sunday February 10, 2019, the International Institute of Islamic Thought (IIIT) hosted Dato Seri Anwar Ibrahim, IIIT Chairman and President of the People’s Justice Party, Malaysia. The event included a closed meeting with the IIIT staff and a public lecture to invited members of the community.

Dato Anwar’s meeting with IIIT staff and executives took place in Al-Faruqi Library. Each department briefed him on their respective achievements during 2018 and their targeted goals for 2019. At the end of the presentations, the Chairman commended staff on their achievements. He further stressed the importance of striving for organizational excellence, guided by a constant pursuit of best international practices, professional integrity, and ethical conduct.

Later and after the meeting with staff, Dato Anwar delivered a lecture on “Conscientious Governance” to a crowd of scholars, community leaders, and invited friends of IIIT. After a brief introduction from Dr. Hisham Altalib, IIIT President, Dato Anwar expressed his delight for being back at IIIT.

Anwar talked about the importance of “our faith, of the values, and the wisdom of our people, the wisdom of the masses.” The belief in the masses, as he mentioned, was “well formulated by a great Spanish thinker, José Ortega y Gasset, in his La rebellion de las masas (The Revolt of the Masses), not revolt in the revolution but in creating this awareness which is very critical.”

On the issue of conscientious governance, Dato Anwar articulated the problem and challenge that “academics and elites think they have all the answers, they formulate ideas that don’t necessarily seem to connect with the aspirations of the masses.” He emphasized that the talk about liberty or democracy will not create any change unless “the entire psyche can be altered and changed.” He gave an example of his visit to the African-American History Museum, which he asserted “is a remarkable and genius effort and is extremely effective in understanding the antithesis of history.”

Dato Anwar underscored that, in many societies today, there is a deficit in good, responsible, transparent, and accountable government. He highlighted the importance of leadership accountability when engaging in societal transformation efforts, and further reminded the audience that “even though leadership accountability was strongly embedded in our religious and cultural traditions, it is not sufficiently reflected in our actions.”

He gave the example of Salah-U-Din Al-Ayoubi, who is often hailed as a great warrior who defeated the Crusaders, when he was equally, and perhaps more importantly, a great ethical leader and statesman who “created a culture of knowledge, discipline, and ethics in governance”, and was able to connect with the demands and aspirations of his people.

Dato Anwar ended his remarks with a note on the importance of justice. He asserted that it is the responsibility of government in any society to lift injustice even if it only afflicts one individual. He noted that the classic letter from Imam Ali ibn abi Talib to the Egyptian governor Malik Al-Ashtar (7th century) -advising him on how to treat the people of Egypt justly- needs to be republished with notes and references because “the ethical dimension in governance is so compelling in this short treatise.” He suggested that IIIT look into the classic texts on governance with a strong emphasis on leadership and integrity, because the failure of governance is a result of the failure of leadership.

Dr. Ovamir Anjum, Imam Khattab Endowed Chair of Islamic Studies at the Department of Philosophy and Religious Studies, University of Toledo and Dr. Kamran Bukhari, Director – Center for Global Policy, were the discussants. Dr. Qamar-ul-Huda, Director, Center for Global Policy, was the moderator of the question and answer session. Ms. Amina Derbi, Policy Research Executive Associate, IIIT, was the hostess of the event. 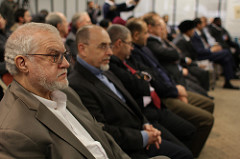 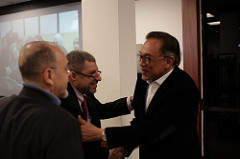 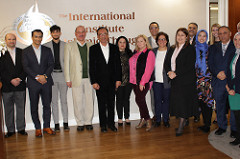 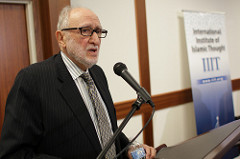 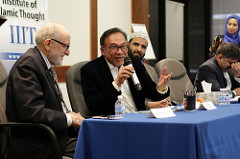 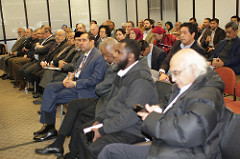 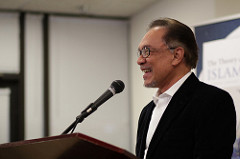 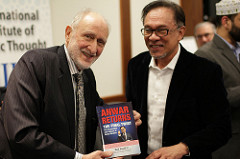