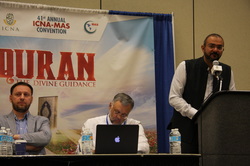 The International Institute of Islamic Thought (IIIT) held a series of panels at the 41st annual convention of the Islamic Circle of North America (ICNA) in Baltimore, MD, on Sunday, May 29, 2016.

He explained that IIIT is devoted to the revival of Islamic traditions and the reform of Muslim societies. He affirmed that our sources and principles are unchangeable, and positioned IIIT as the institution dedicated to making our intellectual legacy the core of the solution to our current malaise. He called IIIT the “answer to the crisis of the ummah,” a crisis which is largely intellectual in the institute’s estimation: our inability to translate our eternal message as per our time and space.

The lineup of IIIT panels at the ICNA convention certainly reflected the Institute’s commitment to intellectually address contemporary issues and the large numbers of attendees at each panel showed the thirst people have for solutions rooted in our sources and traditions that go beyond literalistic interpretations.

The Maqasid al-Shariah panel especially resonated with the audience as it focused on taking into account the higher objectives of the Shariah as opposed to treating it as a list of do’s and don’ts.  Prof. Jasser Auda acknowledged the support and strategic vision of the late Dr. Jamal Barzinji when he had shown him the manuscript of his book, Maqasid Al-Shariah as Philosophy of Islamic Law: A Systems Approach, published by IIIT in 2008.

Prof. Auda defined “maqasid” as the objective, reason, and the why for all concerns under Shariah. He called the maqasid approach an “entry point for Islamic thought for a lot of issues,” and hopes that it will soon become a discipline and be taught at universities.

“When we deal with current problems only with fiqh, we miss the mark. There is no depth and our approach is not fulfilling,” he described. He said it’s time we bring “fiqh Islami (Islamic jurisprudence) to fikr Islami (Islamic thought).” At the same time, he cautioned against using maqasid to justify un-Islamic practices as a purported consequence of hifz-al-nafs.

He summed up his talk by clarifying that maqasid does not replace usul al-fiqh (principles of jurisprudence); rather, usul al-fiqh must be applied with the spirit of maqasid al-Shariah, “otherwise we will be literalists.” As such, maqasid is a “window to renewal,” he concluded. At the end of the panel, Dr. Jasser Auda signed copies of his book for audience members.

Next, Amb. Ebrahim Rasool spoke of the Qur’an as a “healing and mercy” from Allah (17:82) and decried our utilitarian approach to the Qur’an. “We treat the Qur’an like a supermarket and take what we want from it, much like ISIS,” he exclaimed. He recalled such cherry-picking in their fight against apartheid in South Africa. “The ulema who cautioned up against it, we dismissed them,” he said.

However, when he was arrested on June 6th, 1987, his transformation began. He spent six months in solitary confinement in the Apartheid South Africa and was allowed to have only the Qur’an. “It became my protection against insanity and prevented me from breaking down in front of my interrogators,” he reminisced.

“At first, I went to the Qur’an for my favorite verses,” Amb. Rasool recollected. Eventually, with the Qur’an as his sole companion, he undertook a systematic reading, varying his day between reciting, reading the translation, memorizing, reflecting, and indexing the Qur’an. “In doing so, I found more purpose, less utility, and became less self-indulgent,” he expressed.

“When you see only rules and regulations, you only see your own victimhood, not larger, more meaningful connections,” he indicated. “The very fact that the Qur’an has so many parables goes against our literalist reading!”

On the other hand, when we take the maqasid approach, it speaks to our fitrah and the Qur’an truly becomes a healing and mercy, Amb. Rasool stated.

Amb. Rasool elaborated that Islamophobia is part of a lineage that includes racism, sexism, and xenophobia. He suggested that we must comprehend what we are dealing with, understand that we are victims without internalizing victimhood, and recognize that there is clear and present danger as we stand on the eve of the institutionalization of Islamophobia. He said we  must awaken agency within us so that we can make broad alliances, like the Hilf al-Fudul, based on common cause and trust. “The best way to fight Islamophobia is to fight racism. Fight the whole evil family, not just one evil sibling,” he asserted.

Dr. Engy Abdelkader, an award-winning attorney, Assistant Director of Georgetown’s Bridge Initiative, and a professor at the Edmund A. Walsh School of Foreign Services, shared that The Bridge Initiative is focused on researching Islamophobia and connecting it with the public square. She stressed that the misinformation and stereotypes that feed Islamophobia must be undermined by scholarly research and made accessible to the lay people.

She cited root causes of Islamophobia as military intervention which casts Muslims as the potential enemy, coverage of Muslims in the media as overwhelmingly about violence, and anti-Muslim political rhetoric.

In the year 2015, the Bridge Initiative has recorded 174 acts or threats of violence against Muslims, compared to 154 hate crimes recorded by the FBI in 2014. Surges in the 2015 figures ran parallel to Ben Carson’s claim that Muslims cannot hold the presidential office, unflattering coverage of the Syrian refugee crisis in The New York Times, and Donald Trump’s anti-Muslim comments in the wake of the Paris attacks. In the last instance, hate crimes tripled with half targeting mosques. “As Trump attacked mosques, there were physical attacks on mosques,” Dr. Abdelkader specified. One third of all violent attacks of 2015 took place in December, which experienced a five-fold increase, possibly as a consequence of the San Bernardino attacks, coverage, and resulting political rhetoric.

In a study undertaken by Dr. Abdelkader, she has found that the amount of verbal abuse endured by Muslims is comparable between men and women. However, Muslim men are far more susceptible to violent attacks and are 11 times more likely than women to be victims of murder. Dr. Abdelkader admitted that this statistic surprised her since Muslim women are generally considered more vulnerable to hate crimes since they are more identifiable in their hijabs.

Nevertheless, Dr. Abdelkader ended her talk on a high note, praising regular American Muslims for standing up and asking candidates about countering Islamophobia. She said, “They are not activists, they are not trained, but they know something needs to be done!”

Dr. Zahid Bukhari, Executive Director of the Center for Islam and Public Policy (CIPP), discussed the recently formed US Council of Muslim Organizations (USCMO) and its three-pronged approach based on unity, engagement, and communication. He invited all Muslim organizations to join USCMO so that American Muslims have a united platform, even as individual groups continue to work on their own mandates.

He outlined four types of engagement: participation, alliances, open houses, and social services. He spoke about the One America Campaign which aims to register one million voters prior to the 2016 presidential election across all races, ethnicities, and religions. In addition, they seek to create local and national alliances, host a National Open Mosque Day on Oct. 16, and continue to address the needs of the American people whether in terms of feeding the hungry, empowering the homeless, or providing support in times of national disasters.

Dr. Bukhari also stressed the importance of communication and stated that material will be made available in ethnic languages for broad propagation and mentioned 130 bill boards that ICNA sponsored in 2015, which received positive media coverage.

Sheikh Jihad Brown, who has studied Arabic rhetoric, dialectic theology, and Islamic legal theory with prominent religious authorities in Damascus, began by sketching the current situation where the language of compassion and ihsan is increasingly becoming foreign, only spoken by the brave. Yet, “the outside world is quickly becoming our community and religion is not about shunning the world.” He cited the hadith, “Fear the prayer of the oppressed, even if not a Muslim,” to highlight the need for Muslims to be aware of their actions. In addition, he advised Muslims to forego a sentimental sense of identity in favor of a more effective, substantive identity. As such, Muslims will be able to have “more far-sighted objectives which will be inclusive of everything we want to achieve,” he said in closing remarks.

Dr. Aasim Padela, Director of the Initiative on Islam and Medicine, Assistant Professor of Medicine in the Section of Emergency Medicine, and a faculty member at the MacLean Center for Clinical Medical Ethics, asked his audience “to move beyond a static view of the world.” Speaking directly to the lack of interaction between theologians and medical professionals, he illustrated the subsequent elementary perceptions which lead to simplistic views, causing confusion among ordinary people. In the case of organ donation, Dr. Padela said that medical professionals will look to the fiqhi position, find out that there are many fatawa out there which consider it to be permissible from a maslaha perspective, and give a green light. However, from a bioethics standpoint, it is a far more complex issue which gets eclipsed due to the fact that “medical doctors are divorced from the fiqhi understanding and vice versa,” he maintained. He stressed the need to bring both camps together for more holistic discussions.

Maulana Bilal Ali Ansari, president of Khalil Center’s board and a key strategic advisor to the organization, talked about his involvement with the Khalil Center which tackles mental health from a spiritual wellness viewpoint. “We explore how understanding of spirituality can inform psychological treatment,” he explained. Maulana Ansari is well-versed in traditional Islamic Studies and also holds a degree in Applied Behavioral Sciences. His research interests include Hadith, Ḥanafī law, Education and curriculum development, Mental Health, and Islamic Bioethics. The Khalil Center offers many services, such as therapy sessions, workshops, pre-marital coaching, and access to Shariah consultants. From his experience of working with the faith-based Khalil Center, Maulana Ansari emphasized the importance of a collaboration between mental health officials and Islamic legal experts.

Each panel was followed by a vibrant Question and Answer session, enabling audience members to engage with the panelists.