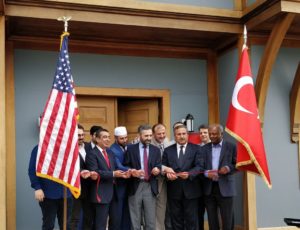 On Friday, July 14, 2017, Dr. Abubaker al-Shingieti, IIIT Executive Director, and Ermin Sinanovic, Director of Research and Academic Programs, attended the official opening ceremony of the US office of Ibn Haldun University (IHU). The ceremony was held at the Diyanet Center of America in Lanham, Maryland.

In his remarks, Dr. Al-Shingieti spoke of the importance of international educational exchange and collaboration, and the IIIT’s role and participation in such initiatives. Prof. Recep Senturk, President of Ibn Haldun University, spoke of the need to create an open civilization, one that is marked by influences from all parts of the globe. He called for the revival of Islamic intellectual traditions which will be accomplished in part by the IHU students’ mastery of at least three languages: Arabic, Turkish, and English.

Ibn Haldun University is a new university, located in Istanbul, Turkey. It was officially established in 2015 and it will welcome first student intake in Fall 2017. It is an endowment university with the vision to stand out as a “research” university in social sciences. Graduate students will constitute 75% of IHU’s student population. IHU will house numerous research and regional study centers as well as strategic studies centers. IHU will be an international university in that one third of the students will be admitted from outside of Turkey. For more information about IHU, please visit: http://ibnhaldun.edu.tr/en/.