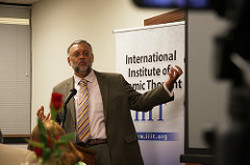 The International Institute of Islamic Thought (IIIT) held its eleventh annual Al-Faruqi Memorial Lecture and Friends of IIIT Iftar Dinner on Wednesday June 15, 2016, hosting more than ninety guests. The ultimate goal of the yearly IIIT Iftar dinner is to provide an inside look on IIIT’s objectives and principles as well as celebrating the holy month of Ramadan with IIIT’s friends and affiliates.

The event began at 7:00 PM with opening remarks from the host, and was followed by beautiful Qur’an recitation and an English translation. A video presentation was played for the guests to further present IIIT’s principles and main goal of reviving and reforming Islamic Thought as well as introducing the initiatives and programs IIIT has led in recent years. This years’ IIIT traditional Iftar dinner was truly sentimental, as there was a clear absence of two of IIIT’s founders, Dr. Jamal Barzinji, who passed away in 2015 and Dr. Taha Jabir Al Alwani, who passed away this year. The event commemorated both of these remarkable figures in IIIT’s history.

Dr. Hisham Altalib, the current President of IIIT, stated that this was not only a great loss to IIIT but also to the Muslim Ummah, by expressing that the work done by Dr. Barzinji and Dr. Al Alwani will never be forgotten and that they have certainly paved the way for the future. Dr. Abubaker Al-Shingieti, the Executive Director of IIIT, reflected on the final words of guidance given to him by Dr. Jamal Barzinji. Even in his last days, Dr. Barzinji’s aspirations were for the community to unite and to protect the vision of IIIT. Dr. Taha Jabir Al Alwani, a founder of IIIT and a pioneer of Islamic thought, was commemorated at the event by his granddaughters, Hadeel Al-Alwani and Omama Altalib who read his powerful last piece “I am Muslim”. The piece exemplified his life of serving humanity and his mission of upholding the true values of Islam. In his last piece he writes “I strive to guide human beings, light their path and walk with them along the path to heaven”.

Alex Kronemer the co-founder of Unity Productions Foundation (UPF), a non-profit organization with the aim of countering bigotry and creating peace in the media by creating educational films, was invited to the stage to speak about his passion for deep engagement in interfaith communities. Kronemer, who is also a film director, introduced and screened a part of his IIIT Legacy Video Project. The video project featured interviews with Dr. Jamal Barzinji, Dr. AbdulHamid AbuSulyman, Datuk Seri Anwar Ibrahim (former Deputy Prime Minster of Malaysia), Dr. Ahmed Totonji, Dr. Hisham Altalib, Dr. Yaqub Mirza, and Dr. Omar Kasule. The IIIT legacy project highlights the history and background of IIIT as well as the accomplishments made by the IIIT founders and their impact on the community as a whole.

Ambassador Ebrahim Rasool was the keynote speaker of the event. Ambassador Rasool is a South African activist, politician, and diplomat who has previously served as the South African Ambassador to the United States. His most recent positions have included Member of Parliament in the National Assembly, Special Advisor to the State President, and Premier (governor) of the Western Cape Province. Ambassador Rasool has had a prominent history of involvement in the anti-apartheid struggle including leadership in the United Democratic Front (UDF) and the African National Congress (ANC). As Premier of the Western Cape, he was instrumental in attracting foreign investment and making significant strides towards achieving the Millennium Development Goals (MDG’s). During his speech at the Al-Faruqi Memorial Lecture program, Ambassador Rasool focused on the impact and legacy of the founder of IIIT, Ismail Al-Faruqi. He voiced, “Had Ismail Al-Faruqi been alive today he would have been a driver of a full transition in the traveled world and the devastating things that we see being done in the name of our religion; we need to make the transition further from comparative faith to collaborative faith”. He spoke about Ismail Al-Faruqi’s changes in identity and ideology which led to a better understanding of knowledge, life, and thought. He also emphasized the importance of education in Islam and the necessity of looking beyond to see the problems that affect us and our communities. He reiterated his concerns of how the community must make a serious effort to transition into collaborative faith and offered methods on how to make this transition successful in order to better our community.

Dr. Yaqub Mirza, the President and CEO of Sterling Management Group introduced elected community officials to the podium to share their short remarks. Luann Bennett, Democratic candidate in Virginia’s 10th Congressional District, spoke about uniting our communities in light of recent events, “We are living in very turbulent times and that it is critically important that we stand up and gain a sense of community not just in our district, but in our state, and in our nation. I want to remind everyone that we are together”. Jennifer Boysko, Delegate, Virginia House of Delegates member from the 86th district, praised the work being done at IIIT, “I really applaud what you do here at IIIT, focusing on education and on helping other people understand Islam in a way that you don’t hear about on the news”.

A few of IIIT’s friends and affiliates were invited to make short remarks at the Iftar dinner as well. Douglas Johnston, the President and Founder of the International Center for Religion & Diplomacy, spoke about the recent projects developed to solve the problem of Islamophobia in the United States. Dr. Abdulaziz Sachedina, IIIT Chair in Islamic Studies at George Mason University, spoke about the importance of reforming the way Islamic Thought is viewed at the institutional level, “We want to go beyond the institution of research and give our research and its benefits to the community”. He also reminded the audience of Dr. Taha Jabir Al Alwani’s great impact on reform. Imam Feisal Abdul Rauf, the Founder and Chairman of the Cordoba Initiative, spoke about the work that needs to be done in our communities and that it is necessary that we find a new approach to solving the issues we face today.

Tracy Fitzsimmons, the President of Shenandoah University, a partner of IIIT, spoke about the importance of colleges and universities in order to prepare the next generation for a bright future. Dr. Vanda McMurtry, Chairman of the Board of the Hartford Seminary, highlighted the strong partnership between IIIT and the Harford Seminary. He discussed the joint program between the Seminary and IIIT, the Graduate Certificate program in Imam and Muslim Community Leadership.