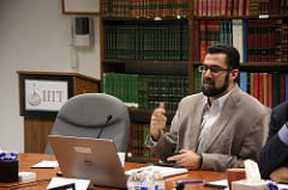 The International Institute of Islamic Thought (IIIT) hosted a Special Lecture by Dr. Aasim Padela on Tuesday, Dec. 13, 2016, as a follow-up to the earlier-held Fiqh Forum on organ donation on July 20, 2016. Dr. Padela’s lecture was followed by a Special Panel and Discussion.

Dr. Padela is the Director of the Initiative on Islam and Medicine, Associate Professor of Medicine in the Section of Emergency Medicine, and a faculty member at the MacLean Center for Clinical Medical Ethics at the University of Chicago. At the Special Lecture, Dr. Padela spoke on “The Confluence of Islamic Law, Muslim Attitudes, and Public Health Interventions: Righting the Narratives about Organ Donation and Islam.”

Dr. Padela sought to debunk popular myths regarding Muslims and organ donation, including the notion that Islamic law unequivocally endorses organ donation; that the only question to consider is the permissibility of donation, and that fatawa are successful in changing behaviors.

In doing so, Dr. Padela provided an overview of scholarly rulings on organ donation, all of which do not permit organ donation, and their qualifiers. He also highlighted issues such as brain death and the need to keep the heart going even after declaring death just so the organs could remain viable. He also questioned whether fatawa alone can change behaviors, quoting studies in Turkey and UK where this was not the case.

Dr. Padela emphasized the need to consider the Islamic ethico-legal views on donation and recommended that holistic informational materials should be provided to people to aid their decision-making rather than only promotional material.

Panelists in the Special Panel included, Imam Johari Abdul-Malik of Dar al-Hijrah, Dr. Jasser Auda of Maqasid Institute, UK, Lori Brigham of the Washington Regional Transplant Community (WRTC), Dr. Padela, and Imran Zaman, a tissue recipient. Imam Johari spoke about the need to make the community aware of issues such as organ donation in captive audience scenarios, such as funerals and weddings. Dr. Auda stressed the importance of educating our scholars so that they can better represent multifaceted issues such as organ donation in consultation with experts in the field. Ms. Brigham expressed WRTC’s willingness to work with IIIT and shared that, within the organ community, this issue is now being discussed on a national level. Mr. Zaman asserted the importance of educating the community so as to eradicate the confusion that people often face when they research the issue online by themselves. The panelists’ remarks were followed by a vibrant Question and Answer session.

In between the Special Lecture and the Panel, Lesley Compagnone of WRTC gave a brief presentation on how they approach mosques and individual families to discuss the sensitive issue of organ donation and transplantation.