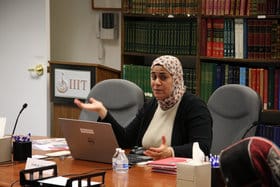 The International Institute of Islamic Thought (IIIT) invited Dr. Feryal Salem to deliver a book talk on Tuesday, Nov. 8, on her recently published book, The Emergence of Early Sufi Piety and Sunni Scholasticism:ʿAbdallāh b. al-Mubārak and the Formation of Sunni Identity in the Second Islamic Century (Brill, 2016).

Dr. Salem, Assistant Professor of Islamic Scriptures and Law and Co-Director of the Islamic Chaplaincy Program at Hartford Seminary, began with thanking IIIT for a publishing grant which enabled her to hire a copy editor for her book.

Calling Ibn sl-Mubarak the “Forrest Gump of the second century,” Dr. Salem explained that, living during the juncture of the Umayyad and the Abbasid empires, he was the Amir al-Muminin in his rank as a hadith transmitter; he contributed to Islamic law at its early phases of development; he participated in jihad; he engaged in numerous theological discussions, and he composed poetry along with writing on piety, which later influenced Sufism.

Dr. Salem explained that a study of Ibn al-Mubarak’s role in hadith transmission counters allegations that the isnad system is fabricated; in the process, she cited patterns in the wording and style of transmitters, the networks of scholars that existed at the time, and the biographical dictionaries, in which dates, geographical locations, and references all match. Dr. Salem writes in her book:
Ibn al-Mubārak’s career as a scholar offers a window into the practical application of how one important individual in this network of hadith scholarship that would define the Sunni tradition represented the scholarly milieu that formed the backbone of the ahl al-sunna wa al-jamāʽa, or proto-Sunnis. In our brief examination of the ṭabaqa or generation of scholars preceding Ibn al-Mubārak as related in biographical dictionaries, as well as the generation of scholars following Ibn al-Mubārak’s, we see an interconnectedness that held both symbolic and scholarly significance to the early Muslim community. The symbolic significance was that because of the network of hadith scholars that preserved much of Islamic knowledge in the form of hadith, Muslims could lay claim to a continuity of their tradition that has been preserved through isnād. This would become viewed over time as Sunni Islam’s normative scholastic tradition that was passed on from each scholastic generation to another.

Furthermore, Dr. Salem discussed the concept of zuhd – commonly translated as asceticism – in which the possession of wealth and property were not seen as an obstacle to connection with God. For instance, she said that Ibn al-Mubarak was a wealthy merchant who “lived in the world without being worldly.” Indeed, Ibn al-Mubarak was the first to publish a Kitab al-Zuhd and his work indicates that zuhd was considered more to be “piety and virtue ethics” than asceticism.

As a result, Dr. Salem concluded that the stereotype that Sufism is something separate from mainstream Islam and that it emerged from influences from other faiths is unfounded. On the contrary, piety, ethical conduct, and spirituality have been foundational aspects of the philosophy of Islam from the very beginning and this is amply illustrated by Ibn al-Mubarak’s life work.