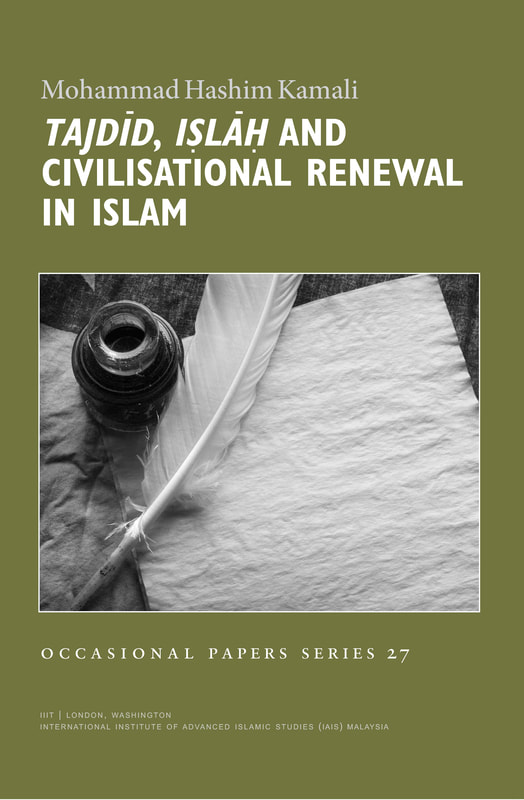 The history of Islamic thought is marked by a continuous tradition of internal revitalisation and reform embedded in the principles of islah, and tajdid. The ultimate purpose has been to bring existing realities and social change in line with the transcendant and universal standard of the Qur’an and Sunnah through a process of restoration and reform. The tradition of islah-tajdid has thus consistently challenged the Muslim status quo and prompted fresh interpretation of the Qur’an and Sunnah, understood and implemented through the methodologies of interpretation and ijtihad, as well as the rejection of unwarranted accretions to the original messages of Islam. The basic theme of the paper is that civilisational renewal is an integral part of Islamic thought. The paper looks into the meaning, definition and origins of tajdid and islah and their relationship with ijtihad, and how these have been manifested in the writings and contributions of the thought leaders of Islam throughout its history. It also develops tajdid-related formulas and guidelines that should lead the efforts of contemporary Muslims in forging the objectives of inter-civilisational harmony and their cooperationfor the common good. Professor Dr. Mohammad Hashim Kamali is Founding CEO of the International Institute of Advanced Islamic Studies (IAIS) Malaysia. He was Professor of Islamic Law and Jurisprudence at the International Islamic University Malaysia (1985-2004), and also Dean of the International Institute of Islamic Thought and Civilization (ISTAC) from 2004 to 2006. Professor Kamali serves on the advisory boards of 13 local and international academic journals. He is currently Chairman, CIMB Shariah Committee 2007; Senior Fellow, Institute of Strategic and International Studies (ISIS); Senior Fellow, Aal al-Bayt Royal Institute of Islamic Thought; Chairman, Shariah Board, Stanlib Corporation, South Africa; Senior Fellow, Afghanistan Academy of Sciences; Editor-in-chief, Islam and Civilisational Renewal, IAIS Malaysia; and Non-Executive Director, CIMB Islamic Bank Bhd. Professor Kamali has addressed over 120 national and international conferences, and published numerous books and more than 130 academic articles. Amongst his published works are “Freedom of Expression in Islam” (Cambridge, 1997); “Freedom, Equality and Justice in Islam” (Cambridge, 2002); and “A Textbook of Hadith Studies” (Leicester, UK, 2005). He was twice awarded IIUM’s ‘Isma‘il al-Faruqi Award for Academic Excellence’ in 1995 & 1997 and also the King Abdullah I bin Hussein International Award in 2010.