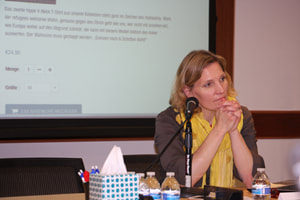 On Tuesday May 9, 2018, Dr. Cynthia Miller-Idriss gave an informative presentation about the subject of her new book “The Extreme Gone Mainstream: Commercialization and Far Right Youth Culture in Germany” at the International Institute of Islamic Thought. She described how extremist, racist/ nationalist codes and symbols are used in various products -especially clothing- targeted at younger people in order to promote extremist ideologies into the mainstream German culture.
Dr. Cynthia is a professor of education and sociology at the American University in Washington, DC. She has done extensive study of material culture and how it shapes and is shaped by far right extremism. Additionally, she is a Senior Strategic Advisor at IIIT, collaborating with a team of researchers working on the Advancing Education in Muslim Societies (AEMS) project.

She first gave a brief introduction on why she wrote this book and how “it was an accidental project.” While attending a conference in Berlin in 2009, Dr. Cynthia’s editor asked her to choose a cover photo for her soon-to-be-published book, “Blood and Culture.” While searching through photo archives, she was caught by surprise how different the clothing worn by these groups were from the images she had seen in her previous visits to Germany. She noticed “more mainstream colors, certainly mainstream styles, new kinds of symbols, high quality clothing showing up on the market in ways I had never seen” in the last 15 years that she lived on and off in Germany. Researching the archives led her to other websites that sold different brands of clothing with indirect and intricate forms of coding. Some were hard to interpret -such as the myth of sacred origin influenced by the Viking times- while others were not. Some used contemporary language such as “send them back,” or non-German words to avoid illegal action, such as Swastika, a Danish word, instead of the German equivalent. The young people were creative in avoiding using illegal symbols. For example the number 88, which represents HH for Heil Hitler, would be replaced by 87 + 1. The common factor between the different brands was the high price, some reaching thirty euros and more for a tee shirt.

Dr. Cynthia returned to the US only to find herself constantly thinking about the clothes, codes and symbols: who was producing them, did the youths know what they were wearing, did they know what they were buying? She decided to take a sabbatical year, developed a database and analyzed about 3000 historical and contemporary images, interviewed students and some teachers in two vocational schools for construction trades. One of the schools banned all ideological symbols, brands, logos, while the other did not. She oversampled groups that had far right engagement, such as scaffold builders and concrete layers.

Although there was commercialization of Nazi souvenir products in earlier years, these were cheap items that consisted of stickers, bumper stickers, tee shirts, buttons, etc. that were sold through distributors and mail catalogues. However, companies such as Thor Steiner –which was taken to court for creating a logo that used two banned symbols used by the Nazi party but won the case on the grounds that this was a new logo- have high priced products, branches in many countries, modern mainstream looking stores, and catalogues that “show alternative anger towards society.”

Dr. Cynthia’s findings show that the far right and other forms of extremism are not only political but also cultural and emotional spaces that are often times the driving forces behind young people gravitating towards extremism. She stressed that “it is important to understand that style is not only something that reflects how young people are feeling, but it also has the power to shape it.” Dr. Cynthia concluded by saying: “We have very strong free speech protections in this country as we should, but I think it’s a role that civil society and watch dog groups can play to try to keep better tabs on it and put pressure on producers and distributors to not sell hate because –as I make the argument in the book several times- they are the gateway and reflection to the scenes.”

Dr. Ilham Nasser, Senior Researcher (AEMS), moderated the talk, which was followed by a Q&A session.