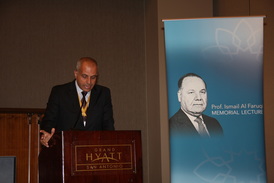 The International Institute of Islamic Thought (IIIT) recently hosted its Ismail al Farouqi Memorial Lecture at the annual meeting of the American Academy of Religion in San Antonio. The lecture, delivered by Prof. Ahmad Atif Ahmad (University of California, Santa Barbara), on the current problems and challenges facing academics in the field of Islamic Studies. This is the third time the IIIT-organized lecture has been held at the conference, which attracts scholars of religion from all over the world and is considered one of the primary meeting points for discussions on the latest theories and trends in religious studies.

After an informal dinner and reception, the evening’s events began with host Dr. Ermin Sinaonvic outlining and the critical role that Prof. Ismail al Faruqi played in establishing the Islamic Studies Group at the conference. This introduction was followed by further remarks from Dr. Abubaker Alshingieti who stressed the continuing mission of IIIT and the memorial lecture to bring together scholars and foster debate.

During the lecture, Prof. Ahmad focused on three important problems that face the field of Islamic Studies: a desire to constantly borrow theories from other fields, a culture of criticism that fails to produce positive outcomes, and a tendency to label the use of specific terms as anachronistic. “In the past there was an assumption that there is a set of neutral, global set of rules and tools that can help us understand religion, like those of philosophy or anthropology,” said Prof. Ahmad. “However, over time we have come to realize that these tools are in no way neutral and come with their own kinds of baggage.”

On the positive side, Prof. Ahmad noted that North American academia had made significant strides in recent decades, stating, “Today we have an academia in North America that is built on the idea of due process, and that is a good thing. You are no longer at the mercy of a particular ideology and your work is judged by your peers.”

It is in that due process, according to Prof. Ahmad, that Islamic Studies should look to in order to develop solutions. “Now that we are based on a process each scholar must look somewhere to find an anchor, and once we have found one that we are confident with we should stick with it. We should speak [academically] with a greater level of certainty.”