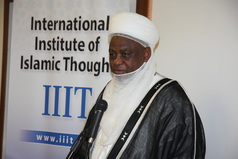 His Excellency Dr. Muhammad Sa’ad Abubakar III, Sultan of Sokoto, Nigeria, visited IIIT on Tuesday, July 26th. He had a brief meeting with IIIT executives and then he attended the special lecture “The History of the Sultanate of Sokoto and its Current Challenges” with his group and invited guests.
Dr. Abubaker Alshingieti, Executive Director of IIIT, welcomed His Excellency and the guests and acknowledged the principal organizer of the event, the International Interfaith Peace Corps (IIPC), a new organization founded by Imam Mohammad Magid, former President of the Islamic Society of North America (ISNA) and current Imam of ADAMS Islamic Center in Sterling, Virginia. Imam Magid gave a synopsis of the organization and its major role in family health and education in Africa, especially in Nigeria. He was followed by Dr. Hisham Altalib, IIIT President, who gave a brief history of the IIIT and its mission.

His Excellency Sultan Abubaker thanked IIIT for welcoming him and his group. He mentioned that “the work that we do back in Nigeria through our various foundations and efforts in interfaith interactions and what IIIT is doing here are complementary”. ” I think we will have a mutual common ground to work with more closely.” he added. His Excellency mentioned that one of the greatest jobs that gave him satisfaction in the last ten years was publishing the works of his forefathers who were scholars who wrote about 350 books in various disciplines from the Islamic point of view to medicine to astronomy and many other subjects. At the end of his speech, he presented various volumes of these publications to IIIT.

After the guests enjoyed a delicious dinner, Dr. Usman Bagaje, the keynote speaker, spoke about the history of the Sultanate of Sokoto as well as the contemporary challenges facing it.

He was a Brigadier General in the Nigeria Army. He is currently an important bridge builder between Nigerian Muslims and other religious groups especially Christians. He travelled widely both in Nigeria and foreign countries preaching peace and unity among different inclinations. He undertook the publication and widespread of many literary work written by scholars of Sokoto Caliphate. He also undertook the repairs and rehabilitation of many Historical sites and locations scattered all over the Sultanate domain.

He is the President General of the Islamic Affairs in Nigeria and spiritual leader of Nigerian Muslims. He is the chairman of Juna’atul Nasil Islam (JNI), a leading religious organization in Nigeria in charge of propagation and enlightenment of Islamic Religion in its real philosophy, drawn largely from the teachings of the Holy Prophet (SAW) and the caliphs after him. His inner council supervises the establishment, repairs and administration of religious activities in his domain including mosques, organizations, schools and tombs. He is also in charge of appointment and coordination of Imams and adhans in mosques. He also coordinates the activities of moon sighting and Islamic calendar for religious worships.

As a religious leader, the Sultan settles disputes that might arise among organizations and matters of worship and also alms giving or family matters of marriages and inheritance. He ensures the eradication of illegalities and injustices in commercial activities and trades especially in local markets by appointing officers to monitor commodity scales and measures. The sultan is usually assisted in these matters by his Council, District and Village Heads and other traditional and religious title holders and subordinates.

According to Sokoto tradition, “Sultan” or “Caliph” is usually referred a political and religious leader of a Muslim “State”. Before Colonial era in Nigeria (1804-1903), the sultan administered the Sokoto Caliphate referred to by historians as that area consisting old kingdoms of Hausa land and beyond largely in the present Northern Nigeria, Northern Cameroon, old Oyo Empire, present Republic of Niger, French territories of Northern Burkina Fasso, Chad, and some enclaves in Mali and Benin. It also consisted some areas of what was held by powerful Hausa kingdoms of Kabbi, Zamfara and Gobir.

In all these kingdoms and territories taken by the Caliphate, the Sultan was regarded as the political and religious leader. He administered the caliphate through the Emirs he appointed and the war commanders he issued with flags called the flag bearers. He sent his representatives to attend important events in all the territories and settle major disputes. The Emirs paid allegiance to him as their leader. They received flags from him as symbol of power to ensure the caliphate authority in their respective jurisdiction. In turn, the Emirs appointed key positions like Imams, khadis, police heads, etc in their areas with Sultan’s approval. This was the practice until 1902 when the British colonial officers invaded the caliphate and took over the political administration of those territories and made them provinces.

The Sultan at Sokoto was recognized by that system as the ‘Emir’ only in the Sokoto province. This continued until Nigeria’s independence in 1960 and so many changes were introduced in the constitution that affected and reduced the power of the sultan.

However, despite those colonial changes and constitutional reforms, the Sultan of Sokoto continued today as the leaders of traditional rulers in Northern Nigeria. The Emirs continued to pay allegiance and great respect to the sultan as their spiritual head. He also continued to lead them in all religious and traditional matters and in matters relating to political administration of Nigeria as advisory body. The sultan also leads other traditional rulers in consultations with other religious groups during meetings, conferences and religious gatherings both national and international for peace tranquility and progress of Nigeria.