Journal of Education in Muslim Societies

On the theme of

The current discourse on Muslim education in Africa, according to Lo and Haron (2016), has emerged from a polemical approach to the understanding of Islam as a religious tradition and a misunderstanding of the status of Muslims on the continent. They identify two categories. The first frames African Muslims in the shadow of the Arab influence. Partially as a result of colonial intellectual racism against Africans, they are depicted as inferior, victimised subjects, ‘docile agents in their imposed integration into the global ummah’ (Lo & Haron, 2016: 2). In the second category, African Muslims are portrayed in relation to managing the security risk, represented by militant Islam.

Post-colonial endeavours have seen the emergence of vastly different educational discourses and imperatives.  In most African-Arab countries, such as Egypt, humanities and social sciences curricula in schools instil obedience and submission to a regime rather than freedom of thought and critical thinking (Faour & Muasher, 2011). In turn, despite a historical tradition of Islamic scholarship across the West and East African belt, universities and colleges have been set up in countries outside these regions, such as Burkina Faso, Kenya, Tanzania, and South Africa where sizeable Muslim communities reside (Lo & Haron, 2016). While these institutions are providing much-needed education and training for many on the continent, there is an absence of critical scholarship that assesses the politics of Muslim learning whether it be within the home countries or across borders (Lo & Haron, 2016).  In sub-Saharan South Africa, the 300-year history of Muslim education mostly reflects the pedagogical influences of Muslims in the colonized Indonesian Archipelago and sub-East India and Pakistan (Waghid, 2017). Within the last century, the influence of Egypt, Saudi Arabia, India, Pakistan, and, to a lesser extent, Kuwait, Jordan, Iran, and northern African countries, has been significant in guiding Muslim education in formal and nonformal institutions in South Africa.

We wish to invite contributions with a focus on scholarship in Muslim communities. These could be based on empirical research, quantitative or qualitative, as well as theoretical analysis of social, cultural, and educational topics.  The following are a few examples of themes or topics:

This issue will be published in November 2022 and will comprise 4 to 6 papers depending upon the level of interest.

A full paper (limited to 8,000 words, including all references, tables, and figures, etc.) should be submitted online following JEMS’ submission guidelines. Papers submitted will be subject to a preliminary internal review by the editorial team. Papers deemed appropriate for publication in the journal will then be subject to a double-blind peer-review according to journal’s rules for scholarly contributions. 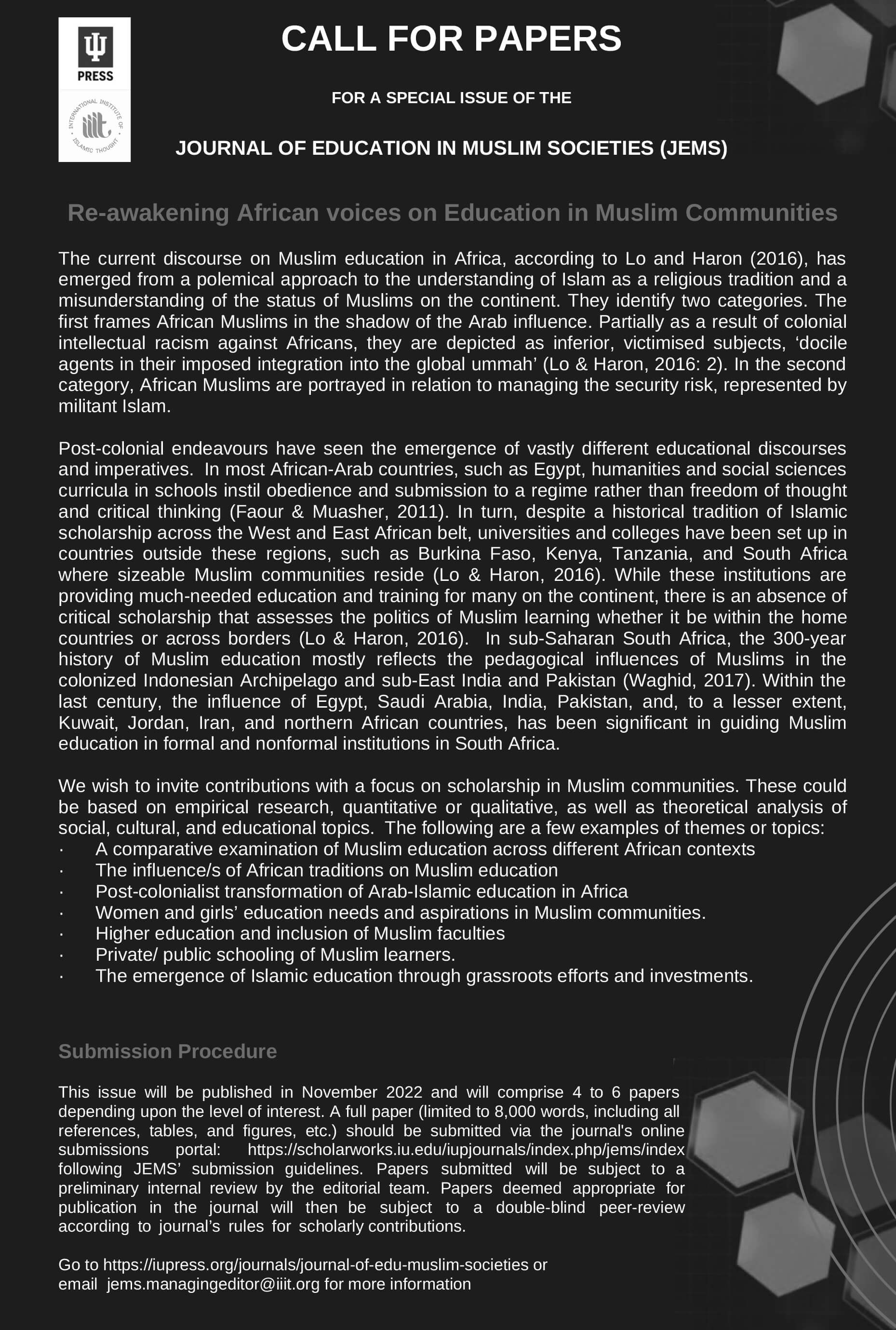