Reaching Consensus on Organ Donation: A Call to the Muslim American Community 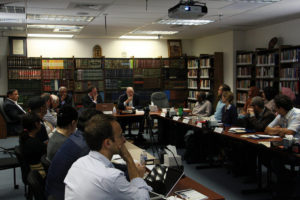 On July 20, 2016, IIIT held its very first Fiqh Forum entitled “Reaching Consensus on Organ Donation: A Call to the Muslim American Community,” in collaboration with the Washington Regional Transplant Community (WRTC). The purpose of this event was to create more awareness and better understanding of concerns related to organ donation and to explore ways of bringing medical professionals, community leaders, religious scholars, and social scientists together to discuss issues of concern to the American Muslim community. The day-long event consisted of four panels, each of which was followed by a robust Question and Answer session.

Dr. Hisham Altalib, President of IIIT, opened the forum with welcoming remarks and Dr. Abubaker Al-Shingieti, Executive Director of IIIT, discussed the relevance of the fiqh forum to IIIT agenda and briefly described the interaction between Imam Johari, WRTC, and IIIT, which resulted in the Fiqh Forum on Organ Donation.

Several representatives from WRTC and organ procurement community were present at the Fiqh Forum. Lori Brigham, President and CEO of WRTC, provided a detailed background on the organ donation process in terms of which organizations and partners are involved, how medical suitability is determined, bringing in the surviving members to discuss the possibility of organ donation, and deciding who on the waiting list gets the available organ. Dr. David Klassen, Chief Medical Officer, United Network for Organ Sharing (UNOS), and Elling Eidbo, CEO, Association of Organ Procurement Organizations (AOPA), offered their expertise while moderating different sessions. Dr. Melissa Greenwald, Director, Division of Transplantation, Health Resources and Services Administration (HRSA), gave concluding remarks. Representatives from Gift of Life Michigan participated in the event too.

Also in attendance were members of the Fiqh Council of North America (FCNA), including Dr. Muzammil Siddiqi, Chairman of FCNA, Dr. Jamal Badawi, FCNA Executive Council member, and Dr. Mohammad Adam El-Sheikh, FCNA Executive Council member. Dr. Siddiqi stated that since there are no relevant verses or ahadith about organ donation, it is an ijtihadi issue which needs to be carefully considered in light of Shari’ah’s higher objectives. Dr. Jamal Badawi raised the need to have experts weigh in on the subject matter before a fatwa is issued, which could take some time.

Prof. Abdulaziz Sachedina, IIIT Chair in Islamic Studies, George Mason University, presented a paper titled, “Organ Donation in Islamic Legal Ethics.” He emphasized that this is a new area in fiqh for which ethical issues must also be considered. As such, he suggested that fuqaha and bioethicists together need to shed light on this issue and provide recommendations for the larger community. In addition, he stressed that our imams need to be trained in order to handle such queries from the community.

Dr. Jasser Auda, Al-Shatibi Chair of Maqasid Studies, International Peace College, South Africa, shared his reservations regarding organ transplantation and alerted the audience to on-the-ground realities in the Muslim world where organs are routinely sold. Further, he raised several concerns, such as: A brain-dead person can still be considered alive, so how can any vital organs, like the heart, be taken out? Is the time of death determined according to when the brain dies or when the heart is removed? He closed by highlighting the Muslim belief that the body is a “trust,” and not something humans own.

Dr. Ilham Altalib, Chairperson, Ikram Foundation, spoke at length about the distinction between soul and body. She mentioned that only the soul tastes death (3:185) and that the body is only a covering for the soul. There is no need to worry about it being resurrected in a deformed state after organ donation, for at that time each soul will receive a new body. As the Qur’an and Sunnah do not expressly forbid it, it should be made a priority in the interest of being more humanistic and to love others as you love yourself, she concluded.

Imam Johari Abdul-Malik, Outreach Director, Dar al-Hijrah Islamic Center, made a strong case for establishing “standards of practice” guidelines for imams to follow in cases such as organ donation and establishing time of death. He remarked that Sulayman Nyang recommends that those involved in reaching a ruling have to consider the text (Qur’an and Sunnah), the context (medical, scientific, and so on), the times that we live in, and our place (circumstances), since there cannot be any one-size-fits-all decision.

There were several doctors in attendance at the Fiqh Forum along with social scientists and pastoral care experts. Dr. Khalid M. Khan, Pediatric Transplant, Intestinal Care and Transplant, MedStar Georgetown University Medical Center, talked about his patients who are mostly children for whom a transplant makes the difference between life and death. If they do not receive a transplant, they die. Dr. Esam Omeish, laproscopic and abdominal surgeon at INOVA Alexandria and INOVA Fairfax Hospitals, delved deeper into the question of life and death as related to the soul. He gave the example of an embryo that has a beating heart at 21 days but, as per Islamic belief, does not have the soul breathed into it until 120 days. As did several of the other participants, he noted that people must be encouraged to accept organ transplantation, which is sometimes thwarted by the lack of understanding on the part of the family.

Dr. Sherine Hamdy, Associate Professor of Anthropology at Brown University, is the author of Our Bodies Belong to God: Organ Transplants, Islam, and the Struggle for Human Dignity in Egypt, based on two years of field research she conducted in Egypt. She acknowledged that despite permissibility by fuqaha, individual Muslims are hesitant when it comes to organ donation. There are clear inequalities where the flow of donation is from the poor to the rich, black/brown people to whites, and even females to males. Therefore, she asserted, the popular western phrase “gift of life” doesn’t have the same positive connotations in such circumstances. In fact, “our bodies belong to God” becomes a charged statement of rebellion. Dr. Hamdy also pointed out that the American concept of “making meaning of a senseless loss” does not resonate with Muslims since Muslims already have a lot of ways to find meaning in death, no matter how sudden.

Tahara Akmal, Director of Clinical Pastoral Education, Reading Hospital School of Health Sciences, shared several personal experiences that led her to become a chaplain. She called for imams and chaplains to receive an education beyond the theological sphere, meaning that they need to familiarize themselves with the social sciences and ethics so that they can really connect with their patients. She also stated that all individuals have the right to expect their views to be respected.

Samuel Shareef, who suddenly lost his daughter to brain death, spoke of their family’s decision to donate her organs as the humane and right thing to do.

During the last panel, everyone joined forces to forge a path forward, understanding that it might take time for FCNA to issue a fatwa, and instead supporting the idea that an authoritative opinion or guidelines might work meanwhile. WRTC committed to providing research and any other resources required to move the process along. IIIT pledged to continue to collaborate with both FCNA and WRTC in order to help the Muslim community reach a consensus on the issue of organ donation.

All participants agreed that the Fiqh Forum was a very productive and educational seminar.