Mustafa Akyol: How the King of the Jews Became a Prophet of the Muslims 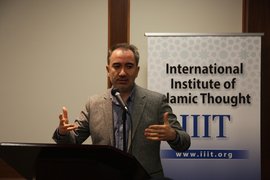 The International Institute of Islamic Thought (IIIT) invited Mustafa Akyol on Thursday, Feb. 16, 2017, to deliver a talk on his newly published book, The Islamic Jesus: How the King of the Jews became a Prophet of the Muslims. Mustafa Akyol is currently a visiting fellow at Wellesley College and an opinion writer for the International New York Times.

Akyol traced the writing of his book to Reza Aslan’s Zealot which was written by a Muslim but not written from an Islamic perspective. This is what Akyol set out to do in The Islamic Jesus – to provide a Muslim point of view on Jesus (as) and how it resonates with different branches of Christianity, including those whose views are considered “heretical” by mainstream Christianity but who are in fact closest to the Islamic position.

Akyol differentiated between the Jewish Christians – the Jews who accepted Jesus as the Messiah they had been waiting for and followed him – and the Pauline Christians who later joined the ranks from among the Romans and Greeks. While the Jewish Chrisitans, also known as Ebionites, believed in Jesus (as) as a man and followed Jewish law, Pauline Christians came to believe that believing in Jesus’ divinity is enough and will save them, without the need to follow the law. Akyol stated that this evolution of doctrine is evident in the Gospel since hardly any reference to Jesus’ divinity are present in the earliest Gospel (such as, Mark) but this changes with later additions, such as the Letters of Paul.

Interestingly, Akyol mentioned that Orientalist scholars claimed that Jewish Christianity had survived in 7th century Arabia and Prophet Muhammad (pbuh) took their teachings and adapted them. However, while they were able to establish a theological connection, they could not find any historical evidence. This further strengthens the Islamic argument that Jesus (as) was a prophet, not the son of God, which is what the earliest Christians also believed – those who directly interacted with him. Paul was in fact among those who had persecuted the Jewish Christians until he experienced a vision of Jesus on a journey which inspired him to convert. He then took it upon himself to preach to Gentiles, Romans and Greeks, and did not spend much time with Jesus’ original disciples at all. In the end, Pauline Christianity was accepted as mainstream and Jewish Christians were rejected as “heretics.” In the process, the “nature of Jesus became really important rather than the teachings of Jesus,” Akyol said.

He, then, spoke about what Jesus (as) can teach Muslim today. Referencing Arnold Toynbee, he said the crisis Muslim find themselves in today is comparable to the plight of the Jews in the face of Roman domination in the first century BC. It resulted in two extreme reactions: Herodianism (those who collaborated with Rome) and Zealotism (Jewish fanatic fighters). In the midst of this predicament, Jesus (as) called his followers to “focus on their religion’s moral principles, rather than obsessing with the minute details of religious law,” Akyol stated. In a similar way, and as advocated by Muhammad Abdu, Muslims should not be “frozen on the literal meaning of the law while forgetting the higher objectives and moral purpose,” he asserted.

The Islamic Jesus has been published by St. Martin’s Press.