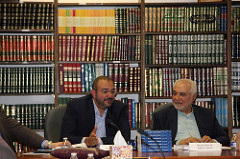 Imam Feisal Abdul Rauf is the founder and CEO of the Cordoba Initiative. He has served as Imam of al-Farah Mosque since 1983 and is the visionary behind Cordoba House. He has also authored several books, including What’s Right with Islam is What’s Right with America (2004) and Moving the Mountain: Beyond Ground Zero to a new Vision of Islam in America (2012).

Dr. Jasser Auda, a IIIT author, is one of the leading scholars of maqasid al-Shariah and a contributor to Imam Feisal’s book. He is Director of Maqasid Institute, UK, and Visiting Professor at Carleton University, Canada.

Dr. Ebrahim Moosa is a professor of Islamic Studies in the Kroc Institute for International Peace Studies and in Notre Dame’s Department of History; he is also co-director of Contending Modernities, a global research and education initiative examining the interaction among Catholic, Muslim, and other religious and secular forces in the world.

Dr. Abubaker Al-Shingieti, Executive Director of IIIT, officiated the event and opened the session with a reiteration of IIIT’s dedication to reform of Islamic thought, with a focus on issues relevant to both the American Muslim and global community. He invited Imam Feisal to share the “story of his project and the challenges he has faced in the measuring and indexing of Muslim states.”

Imam Feisal began his talk by explaining that the concept of nation-state, which is crystallized along national identities as opposed to an empire model of multiple identities, is relatively modern. As an example, he said the Jewish and the Islamic nation-states came into being almost simultaneously – with the birth of Pakistan in 1947 and Israel in 1948. “This had never happened in their histories before!” he exclaimed.

In order to achieve a common definition of what an “Islamic state” is, Imam Feisal created a working group of scholars to define and agree on what an Islamic state would constitute, keeping in mind that the definition must be grounded in Shariah and be cognizant of maintaining continuity historically with scholars regarding the relationship between the ruler and the ruled, he added.

While there was much disagreement on the components of an Islamic state, the scholars were also committed to achieve consensus. “This project provided scientific evidence of the importance of ijma’ after the Qur’an and Sunnah,” Imam Feisal remarked. In the end, they agreed that an Islamic state must acknowledge divine sovereignty foremost and then act to protect and advance its citizens according to the six maqasid (objectives) of Shariah: life, religion, mind, family, property, and honor.

Once the definition was achieved, it was not easy to measure Muslim states because of lack of data, unavailability of reliable data, or old data. In addition, “when you try to index countries that are very different in culture, it became very difficult,” he stated. Yet, based on what was available, they were able to index Muslim majority countries according to the criteria set by the maqasid of Shariah. The data has been meticulously captured in the book.

Dr. Jasser Auda thanked Imam Feisal for the opportunity to work on the project, and for the leadership and persistence that Imam Feisal provided during the project. He noted that, when they would run numbers, Muslim minority countries would actually have a better Islamic index. “So, what is an Islamic state?” Dr. Auda asked. “The state is more Islamic when it approaches the maqasid more. As such, many Western countries are more Islamic in some ways.”

Dr. Auda also critiqued post-colonial Muslim ‘countries’ as “systems of interest groups … instruments of serving the interest of a few” as opposed to the concept of state that serves the public good. He further reminded the audience that the maqasid al-Shariah are derived from fiqh, not from the Qur’an and Sunnah. “While Shariah is divine, fiqh is human,” he said. As such, it is a process of evolution.

Dr. Auda called the Shariah Index Project both post-secular and post-Islamist, hoping that the secular state will become a more ethical state when informed by religion and that this project will be able to capture the realities of the post-Arab spring nations.

Dr. Ebrahim Moosa focused his response on two versions of Shariah: the big picture and the details. While people might want to focus on the big picture, it’s the details that give authority to that big picture. In other words, centuries of scholarly work give credence to the maqasid al-Shariah.

He stated that it is important to understand and converge on a definition of “Islamic state” because of competing ideologies that are seeking to promote a very violent definition of an Islamic state. Moreover, Dr. Moosa emphasized that there isn’t always one right answer, even though we are always trying to simplify situations. In that vein, he recommended that we must “problematize” the situation first before we seek a solution, so it is crucial to raise as many questions as possible before trying to identify answers.

Afterwards, an animated Question and Answer session took place, followed by the book-signing during which Imam Feisal personally engaged with the audience members.