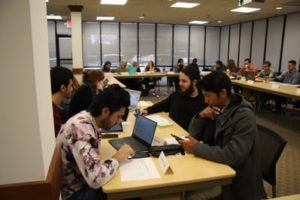 On Tuesday, January 3, 2017, the International Institute of Islamic Thought (IIIT) welcomed 30 students from colleges and universities in the United States and Canada for its second annual Winter Student Program (WSP). This program is designed with the objective of providing instructions in major topics in Islamic thought to undergraduate students, highlighting IIIT’s contributions and efforts to integrate a normative approach to Islam with contemporary humanities and social sciences.

Dr. Ermin Sinanovic, Director of Research at IIIT, gave the students a warm welcome  during the opening session. Dr. Abubaker al-Shingieti, IIIT’s Executive Director, emphasized the crucial role students play in IIIT’s intellectual life and mission. By asking all sorts of questions, the students are helping the IIIT remain relevant and up-to-date, he said. After the students and staff introduced themselves to one another, Dr. Hisham Altalib, IIIT’s President and one of the founders of the Institute, spoke about the history of the IIIT and its role in the intellectual landscape of contemporary Islamic thought, which marked the beginning of their coursework.

At the end of their first day, the students shared their impressions about the program. “You are providing a refreshing academic experience that contrasts with its secular counterpart by promoting a normative approach to Islamic Studies and reform of Islamic thought. An approach that encourages not only to remain true to the principles of Islamic faith, but also to be honest students of modern social studies,” wrote Hamza ElHaoud-Trudel, senior in World Islamic and Middle East Studies and Economics at McGill University in Montreal, Canada. Added Muhammad Akram, currently an Atlas Corps Fellow working at the Center for Islam and Religious Freedom (CIRF), “IIIT Winter Student Program is equipping me with those aspects of Islam which, usually, the local religious leaders don’t provide. I wish for its expansion within the United States and globally, particularly in Muslim majority countries where stakeholder universities can also be involved.”

During the program, the students will study history and interpretations of the Qur’an, the Prophetic Sunnah, Muslim history and civilization, contemporary Islamic thought, Muslim spirituality, and Islamic jurisprudence, among other topics. They will also visit a local Islamic center, as well as the Art of the Qur’an exhibition at the Freer and Sackler Galleries in Washington, DC. Courses are taught by some of the leading scholars coming from various colleges and universities in the US and Canada. WSP is being held from January 3 until January 12, 2017.