IIIT Presents at the Symposium on Muslim Philanthropy and Civil Society 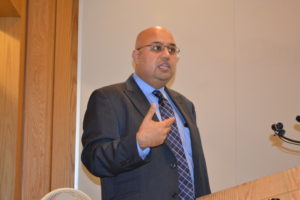 The Symposium on Muslim Philanthropy and Civil Society was held in Indianapolis, IN on October 2 and 3, 2018 in partnership with the International Institute of Islamic Thought –which funded the event- and the Center on Muslim Philanthropy. The main focus of the symposium was to exchange knowledge and analysis of pertinent issues for Muslims around the world and to bridge between philanthropy and education in a strand that combined thoughts, analysis, and research on education and its interaction with philanthropy with regards to topics specific to Muslims societies such as Zakat.

The first presentation was prepared by senior researchers Ilham Nasser and Cynthia Miller- Idriss and Vice President of IIIT, Ahmed Alwani. The paper provided a conceptual framework and the theoretical grounding of the Advancing Education in Muslim Societies. Dr. Miller-Idriss gave an overview about IIIT and presented the idea of the third space where AEMS empirical research is focused. Dr. Nasser presented the research framework and focused on the developmental trajectory of the transformative model and the processes utilized to understand reform and change Muslim culture and education systems.

On the second day, Dr. Nasser presented a study on teaching forgiveness in Arab schools in the Middle East. The presentation focused on the reasoning behind teachers’ decisions to forgive or not based on hypothetical scenarios used in the study. Teachers in the study were from Lebanon, Jordan, Iraq, Egypt, and Palestine. The findings of the empirical study suggest the need for investment in education for forgiveness that is intentional and grounded in the religious and cultural contexts of the participating educators.

Sara Konrath (Indiana University), Shariq Siddiqui (Indiana University), and Saulat Pervez (IIIT) shared a presentation titled, “Islamic Education, Empathy, and Muslim Philanthropy.” Shariq Siddiqui introduced this interdisciplinary project as a collaboration between three researchers who are bringing their individual expertise to talk about how education, empathy, and philanthropy are interlinked. Siddiqui spoke of charity in Islam being both about voluntary action for good as well as inaction: the precognitive stage of decision-making where an individual chooses to abstain from committing an evil act. Saulat Pervez talked about the intersections between education and philanthropy in the Muslim world historically to the present time. Anchoring her remarks in literature that she surveyed, Pervez traced the ways Islamic education and Muslim philanthropy have survived changing social and political contexts and remain fundamentally intertwined. Lastly, Sara Konrath detailed research findings on empathy and how it is integral to well-being for youth, adults, and the elderly. In terms of education, she asserted that empathic teachers have a positive influence on students; students who have higher empathy have better academic outcomes too. Konrath concluded by stating that empathy helps to promote altruistic motivation and action.