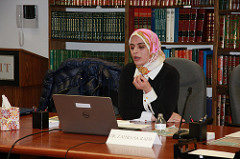 IIIT funded Dr. Rafie’s research on homeschooling in the D.C. metro area through a grant. IIIT routinely awards short-term research grants as well as doctoral summer research grants. The grant enabled Dr. Rafie to carry out her research and write a paper on it, which will be published in the next issue of the American Journal of Islamic Social Sciences (AJISS).

In her talk, Dr. Rafie mentioned that she first came across homeschooling when she moved to Northern Virginia. “As a sociologist, I was very intrigued,” she confessed. It led her to think of concepts such as education and knowledge that are so salient in Muslim traditions, and how their definitions are impacted based on the type of education a family adopts.

Remarking that homeschooling predates public schooling systems, Dr. Rafie explained that public schools were founded primarily to “socialize citizens to the allegiance of the government and state.” Although often couched in egalitarian terms of equal opportunity, the beginnings of public schooling are more sinister and had this “hidden curriculum” built into them. As such, “homeschooling is a revolutionary movement because it is opting out of the system.”

Historically, the family has been the foundational source of education. With the advent of schooling, it has become the secondary basis of education; along the way, it has also become an important agent of socialization. The school’s pre-defined concept of education may or may not run counter to the family’s definition of education, which is why many families choose to homeschool in general, Dr. Rafie said.

Dr. Rafie commented that homeschooling was revived in the 1960s and 1970s as a countercultural critique of public education. By the early 1990s, almost every state was granted the right to homeschool, “placing control back to the parents,” she added. The white population predominantly opts to homeschool their children and Muslims form 0.1% of a total 3.4% families that homeschool, as per the National Center for Education Statistics (NCES).

As a result of her interest in homeschooling and the doubts surrounding it for Muslims, Dr. Rafie selected a representative sample of participants and carried out in-depth interviews with them, including visiting their homes for observation. Through detailed questionnaires, she was able to ascertain that the majority of Muslim homeschooling families felt that the “concept of knowledge of institutional schools did not correspond with their epistemological approach.” To these families, sound understanding of religious values and balancing learning with morality were crucial.

When Muslim families decide to homeschool, it triggers double questions of allegiance “because their citizenship is already questioned as a minority group,” she stated. The overwhelming majority of the parents she interviewed felt that there was no contradiction, citing the importance of moral foundations for sound citizenship. Indeed, Dr. Rafie noted, that the surge in homeschooling among Muslims is in itself proof of the fact that Muslims have integrated so much in the society that they are willing to try new methods of education.

Even as Dr. Rafie acknowledged the limitations and short comings of the research, such as a small pool of participants and lack of socio-economic diversity among the representative sample, she believes that her research provides a point of comparison to national statistics on homeschooling and hopes it will be a stepping stone for nation-wide research.
More photos