Dr. Ovamir: ISIS and the Future of Islam 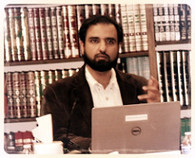 The International Institute of Islamic Thought (IIIT) invited Dr. Ovamir Anjum to deliver a lecture titled, “ISIS and the Future of Islam,” on Thursday, Oct. 27, 2016, in which he presented research that is part of a larger book project.

Firstly, Dr. Anjum discussed ISIS’ self-representation via their online magazine, Dabiq. He noted various themes such as the portrayal of the West as Crusaders and the claim that waging war against the khalifa is tantamount to apostasy. There is a general trend towards exclusivity: anyone who disagrees with them or doesn’t join them is considered outside the pale of Islam. As such, they disapprove of Alqaeda and Taliban groups.

There are several attractions which draw people to ISIS, Dr. Anjum remarked. For instance, their victories symbolize hope for people who are inspired by the possibility of a world-changing revolution. Corruption also disappears from the areas they control, at least temporarily, Dr. Anjum said. Then, their ranks are full of “folks who have converted to Islam just to join ISIS,” he stated. They also promote their child soldiers, giving the outside world the message that “every one of us will kill to the end.”

Next, Dr. Anjum shifted the lens to the larger picture. He quoted that the ISIS death toll at about 20,000 is much smaller than the Syrian one at approximately 400,000. “So, while it is increasing, it is not growing at the same rate as Bashar’s figures,” he commented. Comparatively, the U.N. sanctions on Iraq in the 1990s resulted in the demise of two million people, including half a million children. Sharing statistics from the French Revolution, the First World War, the Hiroshima bombing, and others, Dr. Anjum concluded, “This is not a Middle Eastern or Muslim problem. Secular doctrines have killed far more people.”

Nonetheless, he argued that there should be an Islamic critique of ISIS for several reasons, including the fact that ISIS mobilizes Islam as ideology and identity while violating Islamic teachings. Above all, he stressed that this critique is necessary because all human life is sacred. Relying on historical evidence, Dr. Anjum negated the claim that ISIS is the result of Salafi or Wahhabi doctrines. In addition, he dwelled on reasons why ISIS is more in line with the Khawarij, such as their excessive piety and fanaticism, their killing of those who disagreed with them, their en masse excommunication, their resurrection of premodern practices which are generally considered unacceptable today, among others.

Dr. Anjum seeks to refute ISIS based on a methodological approach grounded in Islamic tradition. “What’s at stake here is the integrity of the Islamic tradition,” he asserted. He also clarified that his is not a political inquiry but an intellectual, theological, and historical analysis. The lecture was followed by a Question and Answer session in which many of the audience members had the opportunity to engage directly with Dr. Anjum.