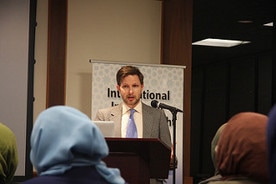 The International Institute of Islamic Thought (IIIT) invited Dr. Jonathan Brown to deliver a talk titled, “Islam and the Problem of Slavery,” on Tuesday, Feb. 7, 2017. Dr. Brown is the Alwaleed bin Talal Chair of Islamic Civilization at the Walsh School of Foreign Service at Georgetown University and he is the Director of the Alwaleed bin Talal Center for Muslim-Christian Understanding. His most recent book, Misquoting Muhammad: The Challenges and Choices of Interpreting the Prophet’s Legacy (Oneworld, 2014), was named one of the top books on religion in 2014 by the Independent.

During his lecture, Dr. Brown explained that this is the first of three papers he is writing on the topic of slavery and Islam. He stated that we need to understand that our sweeping usage of the term “slavery” is problematic because it means different things in various contexts. While we in the United States automatically associate moral evil with slavery due to the very racialized and brutal experiences of slaves here, the same cannot be uniformly said of their counterparts across the world. Hence, he emphasized that whenever we talk about slavery, it’s more important to talk about the conditions slaves endure than to “morally fetishize the word ‘slavery.’”

He gave several examples of slaves or slave-like conditions from diverse parts of the world: a slave in Mecca in the 1400s who had an agreement with his master to buy back his freedom on installments over the course of five years; Sokollu Mehmet Pasha, the grand vizier and de facto ruler of the Ottoman Empire, who was Bosnian and the sultan’s slave – and yet was one of the richest and most powerful men in 1579, not to mention fair-skinned; a factory worker in England in 1860 who was a free man but bound by oppressive labor laws, and members of a juvenile chain gang being overseen by the local sheriff in Arizona in 2004. He asserted that all of these examples cast doubt on one, unified definition of slavery – after all, the slaves do not seem to fit the picture of slavery in our minds but the free men do due to the way they are treated.

Dr. Brown said that slavery is often defined in terms of ownership and property. However, historically, European parents had the right to sell their children as slaves to pay off their debts and between 1760 and 1880, there were “218 cases of Englishmen holding auctions to sell their wives.” In China, husbands routinely named their wives as property in their wills and “bequeathed them to some friend,” he revealed. Through these and other examples, Dr. Brown questioned concepts like ownership, control, choice, and freedom. To this end, he quoted Vaughan Lowe who inverted Rousseau’s famous statement as, “Man is born in chains, but everywhere he thinks himself free.”

Since slavery was exercised in dissimilar ways around the world, he reiterated in his conclusion that it is difficult to pinpoint to one singular definition. Hence, Dr. Brown argued that it’s far more useful to talk about “extreme exploitation of human beings’ labor and the extreme deprivation of their rights,” which we are likely to find in any society. As such, he recommended shifting focus to “regulating conditions and protecting people’s rights in order to prevent such extreme debasement.” He promised to show that the Shariah aimed to accomplish precisely this in his next essay. 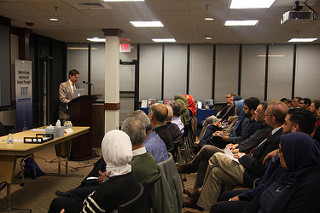