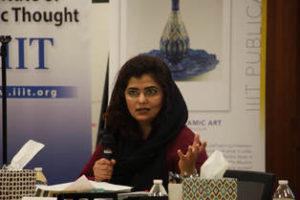 On Thursday, March 1, 2018, The International Institute of Islamic Thought (IIIT) invited Dr. Amna Afreen to deliver a talk titled, “Pakistan’s Educational Trends”.  Dr. Amna has been conducting research on the topic as a Resident Fellow at IIIT since July 2017.

Dr. Afreen began her presentation by thanking IIIT officials for giving her the opportunity to be a fellow at IIIT.  Her overall argument is that the intersection of sectarianism and elitism in the Pakistani educational system has led to negative consequences to the society in general, and to education in particular. She, then, delved into her research by sharing the diversity of schooling models in Pakistan and their use of nationalistic and archaic interpretations of Islam, to the exclusion of minority populations and adherents of other faiths. In particular, she highlighted the sectarian and parochial slants of madrasas and newly established “Islamically” elite schools.  She cautioned that any integration of national curriculum in madrassas should happen after significant reviews of both the national and madrasa curricula.

She traced the Islamization of the curriculum to General Zia-ul-Haq’s regime, which she asserted has increased Pakistani people’s intolerance, making it the “third least tolerant country in the world in terms of social acceptance of religious diversity,” according to the Pew Research Center’s Forum on Religion and Public Life.

Dr. Afreen underscored various other issues regarding the national curriculum, such as the imposition of Urdu as the medium of instruction in public schools even though it is the mother tongue for only seven percent of the population and the memorization-heavy focus of education and assessments. She criticized private schools for their high tuition fees and newly sprouting Islamic schools for their exclusivist policies. At the same time, she warned that 48 million people are illiterate in Pakistan, with 24 million out-of-school children. She added that almost half of government schools are in deteriorating conditions and lack basic infrastructure.

Regarding madrasas, she spoke of their archaic syllabus with books that were “written in the medieval ages” as well as discrimination against women who are enrolled for an abridged version of the curriculum. In particular, she stressed the exclusionary ideologies propagated by the madrasas that demonize the “other,” even on a sectarian level.

Dr. Afreen ended her presentation with the following recommendations: the national curriculum should be humanized so that it articulates “universal principles of morality and equality of citizens regardless of ethnicity and religious affinity”; closing the gap between religious and secular studies, and bringing educationalists and ‘ulama together to reform education in Pakistan.

Dr. Amr Abdalla, Director of Evaluation and Assessment, moderated the session. He has been working directly with Dr. Afreen at IIIT on her research.