Over the course of the last five months writing these briefs, we have made the case for an increased emphasis on holistic learning in education across the world. This was a core motivation of the AEMS Mapping the Terrain research when it began back in July 2018 but over the last two years the importance of values and student social-emotional well-being have been brought to the forefront of education policymakers across the globe because of the crisis created by the COVID-19 pandemic. An OECD report from November 2020 emphasized that “The COVID-19 crisis has highlighted that schools are not only crucial as education provider[s], but also as a place to respond to socio-emotional needs and support the well-being of vulnerable students. Schools can ideally be a safe space for vulnerable students, providing psychological support, responding to their socialization needs and creating a sense of community.”

In fact, schools and universities proved to be a model for the rapid response needed in cases of emergencies. With academic institutions in much of the world preparing to resume face to face instruction for the 2021-22 academic year this month, it is worth considering how some of the strategies previously outlined for K-12 schools can be adapted to the post-secondary context and how these can further be tweaked to account for the disruption of the ongoing pandemic.

Our most recent brief discussed the alignment of holistic learning, the Liberal Arts curriculum, and Islamic Education. Key to understanding their alignment is embracing the universal values that are ideally shared across communities and cultures. Mapping the Terrain organizes these values suggested as necessary for social change under three umbrella categories: open-mindedness, responsibility, and the collaborative collective. While the last brief made the case that these should be incorporated into post-secondary education, this brief is discussing how that can be done within the constraints of a college classroom during a global pandemic.

Traditional conceptions of adolescence have rather arbitrarily used 18 years of age as the cutoff point between adolescence and adulthood. While the United Nations groups those aged 15-24 in the same category, “youth,” in most countries and systems of law, people are considered full adults subject to whatever responsibilities that entails when they turn 18. However, in recent decades and particularly in more affluent communities around the world, there is significant evidence from a developmental perspective that what has been described as an “extended adolescence” into people’s mid- to late- twenties is becoming more and more of the norm. Galllo and Gallo (2011) make the case that this extended adolescence is largely driven by a lack of financial independence. As generations of young people enter their 20s unable to establish themselves as financially independent from their parents and therefore less likely to start families of their own, they experience qualitatively different processes of identity development and maturation than those that came before. There are, of course, many assumptions built into this observation that may not hold true across all communities: namely, the degree to which parents of adult children are willing or able to financially support their adult children and whether macro-economic factors are influencing family planning behavior. Whatever the causal mechanism, it is true that birth rates across the developed world are declining as greater numbers of people opt to have children later in life or choose not to start families altogether; within those countries, women with at least a bachelor’s degree have a substantially lower fertility rate than those without. This contributes to the phenomenon of the extended adolescence to the point that some claim that this extension is caused by societal and economic factors, trends that appear to be accelerating as job prospects for youth in the current cohort struggle to find long-term financially stable employment compared to previous generations. Thus, it is important to consider that college-aged people, typically from 18 to 22, are increasingly still in the process of forming their identity, and in need of a holistic educational experiences similar to younger students. With this in mind, let us now look at some of the ways that K-12 SEL activities can be adapted for a slightly older audience.

Two of the core constructs under Mapping The Terrain’s category of open-mindedness are empathy and meaning-making. These are important lifelong skills that are often neglected or taken for granted at the post-secondary level. However, the devastating effects of the global pandemic and its disparate impacts on the physical health of those who contract the virus as well as the psychological well-being of those deprived of regular social contact mean that they should be top of mind for post-secondary instructors.

A previous brief discussed the study by Doney and Wegerif (2017) which evaluated a program aimed at creating dialogue between classrooms in 20 different countries. They found that videoconferencing and blogging between students significantly increased empathy, and specifically interreligious and intercultural understanding. This increased empathy also bolstered students’ resilience against extremist narratives, radicalization, and recruitment into violent extremism. With so many universities transitioning to online- or hybrid- formats, there are opportunities for empathy to be built between college students around the world by bringing in guest speakers and collaborating with classrooms across institutions. Even if you opt to just focus on the group of students enrolled in your course, many of the most rewarding interactions that occur between students in college classrooms occur during unstructured time before or after class. Instructors can try to facilitate these informal interactions by making use of breakout rooms and building in time for students to interact. Instructors that are going back to in-person learning this fall should be weary of the range of challenging experiences that students may have gone through over the last year and a half, and make structured time to address these so that students feel comfortable bringing their whole selves to class each day. This should help avoid some of the most negative impacts of social isolation on the adolescent mind.

Just as kids may struggle to make meaning of the last year and a half and how they relate to it, so too can those in extended adolescence and early adulthood struggle with these questions. Tools like the Social Identity Wheel can be used to open up the conversation, for example, to explore students’ various social and personal identities. Coursework in anthropology or sociology that is already primed to consider the positionality of the reader/researcher may be better prepared to make use of such a tool, but all including the most technical course material can likely benefit from students who are conscious of their own identity and its relation to their classmates and instructors. One may wonder what makes such discussion of identity relevant to wellbeing. In fact, previous research suggests that a strong and supported sense of identity/ies increases the sense of belonging one feels to the institution and community and as a result also increases feelings of empathy and responsibility towards the collective (Baumeister and Leary, 1995). Simply put: when people feel that they are welcomed into a community for who they are, they and the community that welcomes them are more successful. 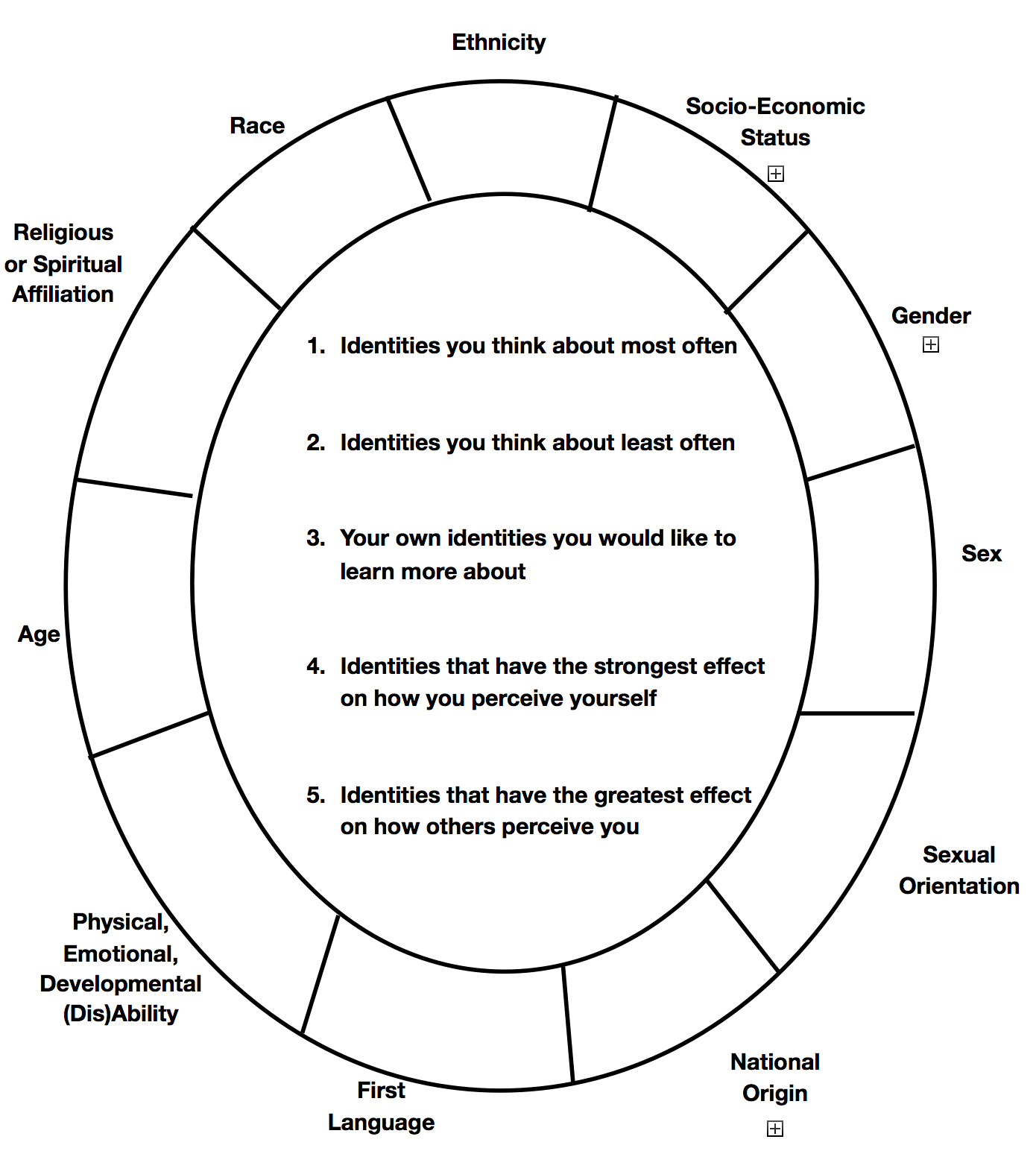 Many universities have been incorporating these concepts typically organized as DEI – Diversity, Equity, and Inclusion – into their first-year programing and as part of the general educational curriculum. Recent years have also seen increased attention given to student mental health, with greater access to clinicians and a healthier dialogue about the scope of mental health challenges students may be facing. These initiatives should continue. With the pandemic having disrupted the last two academic years and primed to disrupt the upcoming one as well, it is more important than ever for universities and their instructors to work to build a community in their day-to-day practice, not simply in silos. The pandemic has been an incredibly socially isolating event, and as students enter their third year under these unusual conditions, we should make sure that activities that encourage open-mindedness, personal responsibility, and active participation in a collaborative collective are not restricted to a single workshop geared towards a limited group of students. Every post-secondary student, regardless of their academic field of interest deserves opportunities to develop their complete self within the university context, just as they deserve those same opportunities in their K-12 schools. Most important here is a mindset shift the likes of which the OECD was advocating for in its 2020 report. Governments and educators at all levels need to acknowledge and embrace the responsibility they bear in supporting the psychosocial and physical well-being of their students. Instructors across academic disciplines and subject matters need to be aware of their students’ increased sense of anxiety and loss and at least provide safe spaces for their students to practice empathy together and make meaning of their new realities.

As this work continues, we hope that you will engage with us in thinking through the
implications of this research. You can do that by responding to this email with any thoughts, by
following us on Instagram (@iiit_insta) and Twitter (@iiitfriends), and by forwarding this
message to anyone in your life who might find it interesting.
Thank you and all the best,
Alex Koenig,
Non-Resident Fellow in Human Development and Education Policy
The Advancing Education in Muslim Societies (AEMS) Team
The International Institute of Islamic Thought.