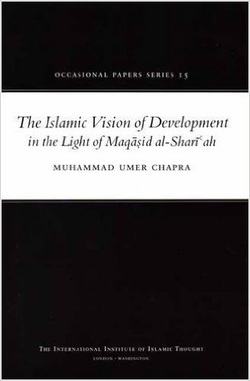 The maqasid al-shari’ah (higher intents and purposes of Islamic Law) have been either directly stated in the Qur’an and the Sunnah or inferred from these by a number of scholars. All of these address the raison d’être of the Shari’ah which, as recognized by almost all the jurists, is to serve the interests of all human beings and to save them from harm. In this paper Dr. Chapra explores the Islamic vision of development in relation to the maqasid al-shari’ah arguing that Islam has emphasized all the ingredients of human well-being, including the human self, faith, intellect, posterity as well as wealth, for society to flourish. For the Muslim world to focus on economic development only may in the short term result in relatively higher rates of growth but in the long-run will lead to a rise in inequities, family disintegration, juvenile delinquency, crime, and social unrest.