The Role of Women in Making a Humane Society 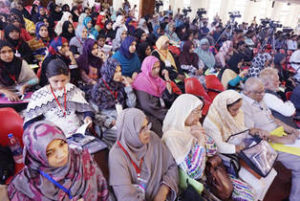 The Institute of Objective Studies (IOS) organized a two-day international conference on the “The Role of Women in Making a Humane Society” on September 23-24, 2017 at Calicut (Kerala), India. The conference was a big success where women, who were in the focus, registered in large numbers. Women delegates came from several parts of India and abroad and accounted. for three-fourths of the attendees.

The former Vice-President of India, Mohammad Hamid Ansari, who inaugurated the conference on September 23 last, was amazed to see the venue, New Nalanda Auditorium, packed to capacity. In his inaugural speech, Ansari said that women constituted about half of human kind and should, therefore, share the same responsibilities as men. He opined that a society would be considered humane if it was motivated by the most desirable of human values. It implied a society dedicated to the principles of justice, equality and fraternity, and the one in which its members were recognized and respected as human beings without differentiation of religion, race, caste, sex or place of birth. This, in relation to the female half of humankind, implied that women got justice, equality and fraternity in equal measure in societies they lived in. He questioned if this corresponded to reality.