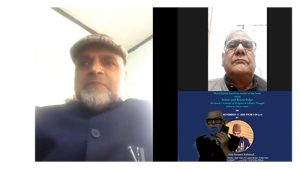 New Delhi: The third lecture based on the review of the book “Islam and Knowledge: Al-Faruqi’s Concept of Religion in Islamic Thought” (edited by Dr. Imtiyaz Yusuf) was organised online by the Institute of Objective Studies, here on November 17, 2020. The lecture was delivered by former dean, School of Media Studies, head, Department of Religious Studies, former dean, School of Social Sciences, and former director, Shah-i-Hamdadan Institute of Islamic Studies, University of Kashmir, Prof. Hamid Naseem Rafiabadi. While introducing the theme, former professor of history and culture, Jamia Millia Islamia and currently, director of Historical Projects, IOS, Prof. Syed Jamaluddin, said that the book under review was in fact a tribute by Dr. Imtiyaz Yusuf, to his teacher, Prof. Raji al-Faruqi who taught him at Temple University. In his book, Imtiyaz Yusuf had explained the concept of knowledge in Islam as understood by al-Faruqi, he observed.

In his lecture, Prof. Rafiabadi, referred to two earlier lectures in which he tried to explain al-Faruqi’s views on the subject. He said that Raji al-Faruqi adopted a new approach to integrated knowledge. His concept of Tawhid was different from the commonly believed propositions. He touched upon various aspects of Tawhid and did not toe the line of ‘yes’ culture. The points made by al-Faruqi were a good example of modern knowledge. He observed that Prof. Faruqi left a rich intellectual legacy which was carried forward by his students, Muslims and non-Muslims.

Though Imam al-Ghazali and Shah Waliullah Dehlavi propounded a theory of Tawhid, yet Raji al-Faruqi’s presentation was unique in more ways than one. He held that al-Faruqi led a new study of religion. The other contribution he made was the study of comparative religion by which he countered the Western ideas about Islamic thought. His students better propounded the concepts of deen or religion, and its monotheistic character as understood by Faruqi. His comparative study of religions strengthened his belief in inter-faith dialogue and international religious dialogue. He believed that Muslims did not attempt to initiate dialogue with the followers of other faiths. It was Raji al-Faruqi’s idea of inter-religious dialogue that some headway was made in North America, he said.

Prof. Rafiabadi held that Raji al-Faruqi highlighted the value of Islamic art. He said that masjid was the best example of Islamic art, which did not get as much attention as it should have. He called for making policies to regulate the study of social sciences. This should not only be for the sake of academic study, but also for social well-being. He noted that monotheistic approach of Islam should be explained in inter-religious dialogues. He referred to Maulana Fazlu Rahman’s presentation of the legacy of Islamic philosophy. There was Islamic philosophy of science and education.

He observed that al-Faruqi was not just a modernist, but he presented methodical inputs to the study of Islam. In his view, Islamic natural sciences were equally significant. According to Raji al-Faruqi, Islamisation was not as important as Islam as a faith. Unless faith was strengthened, Islamisation would carry no meaning. Commenting on Faruqi’s concept of Islamic activism, he said that engagement with society was basic to it. This should be made at cultural level. Elucidating his theory of integration of knowledge, Prof. Rafiabadi said that it was based on Islamic thought and approach to knowledge. To understand integration of knowledge as expounded by al-Faruqi, his works should be thoroughly studied by scholars. He said that the implications of inter-religious dialogue should be in terms of ‘ought to be’ and ‘ought to do’. Since every religion had undergone a change, inter-religious dialogue had become incumbent to understand the commonality of thought. This necessitated further study of Raji al-Faruqi’s work by future scholars. He said that inter-religious dialogue had two implications–ought to be and ought to do.

Prof. Rafiabadi maintained that al-Faruqi’s approached to Islamic studies was unique and different from al-Ghazali and Ibn Taymiyyah in many ways. According to Faruqi, while revelation was the basis of religion, reason was the basis of philosophy. He was more interested in technique and methodology. The relationship among three faiths-Islam, Christianity and Judaism – was based on certain similarities and these could form a basis for the dialogue. Commenting on Faruqi’s concept of Tawhid, he said that for him it was the very basis of human creativity. In this connection, many articles that dealt with this approach had been mentioned in the book. The book contained sublime aspects like Islamic art, Tawhid, education models in modern times, integration of knowledge, etc. The book provided insights into the understanding of Raji al-Faruqi. He said that the book should be accessible to those who were interested in studying Raji al-Faruqi. He mentioned environmental balance in the context of cosmic understanding of the universe. This was so because environmental degradation was not an issue during his time. He observed that a lot of mistrust between Islam and Western religions grew after 9/11 attack.

In his presidential remarks, the secretary general of the IOS, Prof. ZM Khan, observed that Raji al-Faruqi was a unique scholar in several ways. He was an engaged scholar who did not sit in an ivory tower. He presented a comprehensive study of Western religions. Describing the modern age as characterised by a survival syndrome, he said that Raji al-Faruqi made the understanding of Islamic content simple against the existing cobweb of complexities. He was emphatic about not making Islam philosophical. He presented Islam as a democratic religion that could be practised in modern times. Islam was presented as a solution to problems facing humanity. Raji developed Islamic thought encompassing unity of knowledge, universe and mankind, he added.

The lecture ended with Prof. Syed Jamaluddin’s vote of thanks to the attendees. He said that the book was a festschrift by Faruqi’s students. He observed that Prof. Rafiabadi put across his views intelligently. Those who wanted to understand Faruqi in proper perspective must read the book, he said.

The lecture was attended by several Islamic scholars and students of Islamic studies.