On April 23, 2019, the International Institute of Islamic Thought (IIIT) hosted a Seminar on Integration of Knowledge (IOK) at the University of Malaya in Kuala Lumpur, Malaysia. The event took place in the Islamic Studies Academy (Department) and there were over 180 attendees from local universities and organizations as well as a few international guests. Professor Kamila Binti Ghazali, Deputy Vice Chancellor (Academic & International) of University of Malaya gave the welcoming remarks and was the first speaker to address the crowd of over 180. Dr. Ghazali discussed the University of Malaya’s experience with Integration of Knowledge, and the future direction for the university.

After the Deputy Vice Chancellor finished her presentation, the crowd eagerly awaited the next speaker’s remarks. Applause erupted as Dato Seri Anwar Ibrahim, President of the People’s Party, Malaysia, and Chairman of the Board of Trustees for IIIT, walked up to the podium. Dato Seri Anwar Ibrahim discussed the importance of Integration of Knowledge and its relationship to IIIT. In his words, “for the progress of knowledge, there have to be discussions,” and in order to avoid the “dehumanization of man or humans” it’s necessary to hold on to ethics and values, even as the world rapidly changes in terms of technological advancement. He also expressed the importance of seeking knowledge from Western and Eastern traditions, keeping in mind the context and framework that shapes both. Towards the end of his presentation he said the following:

“What is Integration of Knowledge? It is to have that sort of understanding, and with a critical mind. But the issue of faith, ‘aqidah, the issue of ethics, akhlaq, is clear, is strong…remains unshaken.” 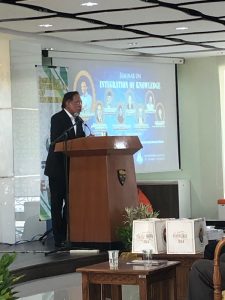 After Dato Seri Anwar Ibrahim concluded his speech, which also paid homage to IIIT founders, great luminaries in his own words, there was a IIIT panel on Current Activities and IOK.

First, Dr. Hisham Altalib, a Founder of IIIT and current President, talked about the importance of reformation of Islamic Thought and how it is an ongoing process that continues over time. He also talked about the history of the organization and the “malaise” of the ummah which it sought to address through research. Dr. Altalib mentioned that there were two main groups in the Muslim world, the secular group and traditional Islamists, which can not communicate and don’t understand each other and both of them failed because in his words, “blind imitation does not work”. Dr. Altalib explained that the foundation of IIIT is improvement (reformation) and renewal and that the organization moved from its paradigm of Islamization of Knowledge to Integration of Knowledge, and recently established a new program of Advancing Education in Muslim Societies (AEMS). He also discussed the importance of parenting within this program in establishing solid ethics, “as they are the first teachers and they are the people who actually make the soul of the person.”

Then, Dr. Ahmed Alwani discussed the Advancing Education in Muslim Societies (AEMS) initiative in more details and its relationship to Integration of Knowledge (IOK). Dr. Alwani explained that: 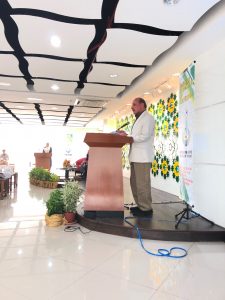 “The two pillars of AEMS are the theoretical framework in the Qur’anic epistemology and the hermeneutics and enlivening the Sunnah, or the manifestation of these principles and values in the Prophet’s life. So AEMS initiative, then, in its theoretical part looks equally at the manifestation of these values in Muslim legacy and practice and also within Western thought and practice. And these two constitute the other two pillars of AEMS, theoretical framework and the interface with Western thought and engaging Muslim legacy. AEMS is embedded in human development paradigm. So in other words, we needed a paradigm that is going to be more integrative of Islamic legacy and the Western thought.”

The final speaker on the IIIT panel was Dr. Anas Al-Shaikh-Ali, the Executive Director of Translation at the Publications and Translation Department, who discussed the dissemination of IOK literature and the importance of “futures education”. He also mentioned the problem that many people today are unable to write well, and this is an area for improvement in education. Dr. Al-Shaikh-Ali highlighted that IIIT has over 600 publications, many of which have been translated into several languages.

After the IIIT panel finished its presentations, Professor Dato’ Dr. Osman Bakar, Al-Ghazali Chair of Islamic Thought and Shaykh al-Kulliyyah gave a presentation on Integration and Synthesis of Knowledge: The Role of Tawhidic Epistemology. Finally, after a dynamic Question and Answer session, the program concluded. Participants and attendees had the opportunity to engage with one another informally as well at the lunch following the presentations. 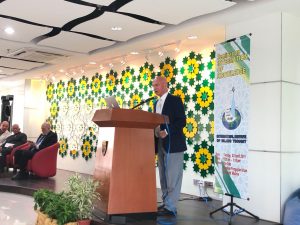 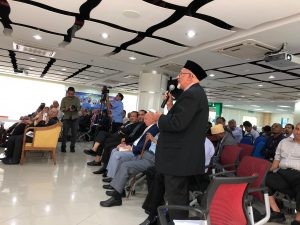