Indonesia and Bosnia: Any Similarities? 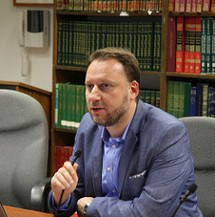 Ermin Sinanović delivered a lecture on “Islam and Globalization in Indonesia and Bosnia” at IIIT on Thursday, Oct. 13, 2016. Sinanović is the Director of Research and Academic Programs at IIIT.

At first glance, it seems clear that Indonesia and Bosnia share very little similarities. Indeed, Indonesia, an archipelago of a quarter billion inhabitants, consists of an 85% Muslim majority, whereas Bosnia has a 50% population of Muslims within its 3.5 million people. However, Sinanović asserted that despite standing at opposite ends of the Muslim world and in radically different environments, Indonesia and Bosnia have much in common.
One such discourse is the issue of Arabization and indigenization. “There has been, in the last decade or so, an increased debate about the influence of Arab-based norms and religious practices in both of these countries,” Sinanović remarked. “Some are going as far as claiming that local, indigenous Islamic practices are in danger of being completely replaced by foreign, imported, Arab-based practices, rooted in Salafi interpretations of Islam.”

Seeking to problematize this trend, Sinanović looked at it from the lens of globalization. For instance, he indicated that while globalization from the West is generally accepted in these countries, influence from the Middle East is resisted. This harks back to the notion of how Islam spread to Indonesia and the Middle East in dissimilar ways. Sinanović acknowledged that politically Islam may have extended into the Middle East differently than it did in Indonesia, for example, but as a religion, it took a similar path, becoming the dominant faith after centuries of co-existence both in the Middle East as well as Indonesia.

Likewise, there has been an outcry about the “imported version of Islam” in Bosnia and Herzegovina, he added. After adherence to the Qur’an and Sunnah, prominent Bosnian scholars emphasize “Islamic traditions of the Bosniaks” as a core aspect of practicing Islam in Bosnia. The concept of Islam Nusantara almost identically focuses on the importance of the local, indigenous form of the religion. Interestingly, though, Sinanović pointed out, the “local version of Islam, in reaction to globalization, is then offered as a global solution!”

In the process, both countries are othering “Arab/Middle Eastern Islam,” not realizing that the actual presence of Islam in their nations is a direct result of Arab/Middle Eastern influence. As such, he argued against both anti-globalizing and othering tendencies, without rejecting localized expressions of the faith. In this age of globalization, he said there was need for a fusion/hybridity approach rather than a clash of local/global trends.

He highlighted the role of ‘urf (culture) and gave examples from the life of the Prophet Muhammad where certain things in Madinah were allowed because it was the norm there, even though they may seem alien to the Makkans. They were able to do this without creating a “Madinan Islam” or a “Makkan Islam,” Sinanović stated. In the end, Sinanović called for a deeper study of the role of local norms in formulating Islamic normativity. The lecture was followed by a question and answer session in which many audience members expressed their surprise that both Indonesia and Bosnia truly had much in common in spite of their apparent differences.